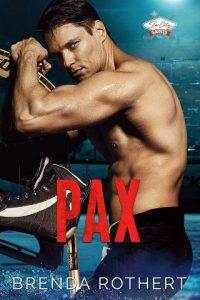 I brace myself as my teammate, Eli, reaches for the football that’s just out of his grasp and it thumps into my chest. I can’t help but laugh as he falls backward, sprawling onto a nearby bench.

“What the hell?” he grumbles. “It’s like running into a brick wall, man.”

“Did you hurt your tender breasts?” another teammate, Pike, asks with a mock frown.

“Have you ever hit him head-on?” Eli asks, grimacing in pain and rubbing his shoulder.

“No, because he’s my teammate and I’m not a dumbass.”

They’re talking about me, and it’s at least the thousandth time I’ve heard the brick wall comparison. I’m six feet, six inches tall and 240 pounds, making me an absolute giant in the world of professional hockey. Though I originally planned to play professional basketball, life had other plans for me, and now I get to play the sport I’ve loved since I was six years old.

Eli and Pike are playing catch with the football to loosen up before practice, while other guys are either dressing or stretching. Eli’s paying closer attention now, but not close enough to see it coming when I throw my arm out and intercept Pike’s next pass to him, only needing one hand to snag the football.

“You suck,” Eli says, a little pout on his face.

“Eat your veggies and maybe you’ll get big and strong, too,” I joke, tossing him the ball.

We’re just over a week away from the start of our second season, all of us eager to get back on the ice and compete. The Las Vegas Saints are an expansion team, and the core players from our first season are still here. Our arena is new, the biggest and best in the league, and our fans love us. But the one thing we’re lacking is the one thing players take the most pride in—championship banners.

A group of us trained together during the off-season, and we’re ready to prove our place in the league. Last year, we all came out of the gate at full speed, many of us wanting to beat our former teams and make them regret putting us up for the expansion draft. This year, though, the name of our game is discipline. We worked collectively and individually with a sports consultant, Hector, who only focuses on mindset.

One of the few things hanging in our locker room is a small poster Hector put in place a few months ago on his first day working with us. It’s simple. A plain white background with a single word in bold blue type: TOGETHER.

We set goals together because that’s the only way we can reach them—by relying on each other and working as one unit.

Pike sits next to me on the bench in front of our cubbies to put his skates on.

“You coming to the pool party tonight?” he asks me.

Immediately, I tense up. Of all my teammates on the Saints, I’m closest to Pike, and I used to attend every pool party and poker night he hosted—which was a lot. Lately, though, I’ve been skipping them, and it’s getting harder to come up with legit-sounding excuses.

“I don’t know,” I say vaguely. “Is Diego back? My skates need to be sharpened and I don’t want anyone else doing it.”