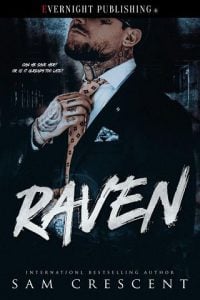 It came and went, or stayed, sucking you down into its vortex.

“Can you ask Smokey when I get out of here? I can’t stand hospitals.”

“For protecting me and Umberto.”

“Umberto? Why the fuck would you call your kid that?”

“Smokey told me it was important. Ugly Beast helped to bring him into the world. I don’t think he’d like the name Raven, but if I have a little girl, I’m going to call her that. Thank you. You didn’t have to do that.”

“No, you really didn’t. I forgive you, Raven. Don’t ever put yourself in danger for me again.”

“I care about you, Ava. It wasn’t out of guilt that I did what I did. You’re Smokey’s woman, and you’re one of my friends. I fucked up. I wasn’t a good friend.”

“Then let’s agree from this day forward, what happened in that basement stays in it. You and I, we’re good. We’re friends again.”

Raven pulled herself out of the memory from several months ago and stared at her reflection in the mirror. She’d been in the hospital after taking one of the worst beatings of her life. Pain was easy for Raven to handle. Fists striking her flesh. The heel of a boot. None of it mattered to her.

She could eventually get over it.

Like now, there was no evidence of what went down that night. No more bruises. A couple of scars that would tell the tale, but in time, they would also fade.

Raven would take the pain over the guilt any day. Ava forgave her. Raven still couldn’t believe it was possible.

She had hurt that kind, sweet woman because of a stupid, fucking, piece-of-shit picture. Everything that had been manufactured by fucking Creed.

Raven’s hands clenched into fists as she stared at her reflection.

Abriana had gotten hurt and lost a child because of her. She had assumed the Prospect didn’t lie, and she’d been wrong.

What would she fuck up next? Who would get hurt because of her?

Tears filled her eyes as she stared at her reflection. “You don’t deserve to live!” She was sickened by the sight of herself. “You are a worthless piece of crap and should have died … long ago. Your disgusting taint should never have met Smokey, should never have been in this club. You disgust me.” With each word she spoke, the tears fell down her cheeks. “You have no right to be here!”

Gritting her teeth, Raven looked down at the bathroom counter and saw the revolver she always kept on her. It was the same one she had bought on the streets years ago. The one that had served her well, and now, her life was in its hands.

She picked it up, her stomach twisting, and she looked in the mirror, hating everything she saw. Staring at herself had always been difficult because of what stared back at her. A distant memory she tried so hard to forget but often found its way back when she least expected it. If that woman could see her now, she would be so fucking disappointed.

The best thing for her to do was to end her miserable existence and to make sure those who had suffered because of her didn’t suffer another moment. It would be so easy. All it would take was a single bullet.