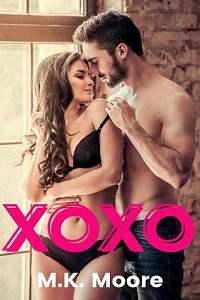 I have been a patient man. I’ve had to be. I met Ren Porter, my little temptress when I was six, and she was four. The day her family moved in across the street, my whole world changed. She became my little sister, Avaline’s best friend. Ren’s brother, Beckett, became my best friend. Our families are very close. Our moms do a book club, but I know they just drink bottles of wine and talk about our dads. At the same time, our dads drink beers and talk about how their favorite football teams are doing this season. It was all very normal.

Back then, I thought she was my annoying little sister’s annoying friend, but that quickly changed. Soon, I was the one following her around. I was the one picking flowers for her and dropping them off on her windowsill. I was the one who held her Hello Kitty purse while she tried on back-to-school clothes at the mall. I was the one who pretended to be bored playing cars so I could hang out with them at their tea parties. She has me wrapped around her little finger. I would have done anything she asked me to back then, and I still would.

Ours are the only two houses on Atlanta Street. It’s like our own little world out here. Nothing but corn fields and freedom as far as the eye can see. My dad, Chance, grows corn as a side hustle. He’s a website designer by trade but loves to get out there in the dirt. My mom, Ella, is a homemaker. We moved to this house about a year before the Porters. The Porters are full-time cotton growers. Out here, it’s church and football on Sunday, with the occasional BBQ thrown in.

I knew when I was ten that I loved her. How could I not? She was sassy and never hesitated to put me in my place when I did something to piss her off, which was often. I knew I loved her when I “married” her in one of those weird backyard ceremonies kids do. Beckett acted like an asshole, not wanting to play with the girls, but I made him do it. On some level, I’ve always known Ren was it for me. Not once did I ever think I wouldn’t marry her for real someday. The years have done nothing but make me more sure that she’s mine. I ignored other girls in school because I knew they weren’t for me. They weren’t Ren. They weren’t the reason I breathe. They could never be her, and I never wanted to do anything that would make Ren hate me one day. Everything I have and everything I am is just for her. All of my firsts are hers. On the first day of her senior year, I started dropping hints.

Every morning, I sneak over to her first-floor window and quietly push it open. I slap a post-it note with something I love about her on it. Yesterday, it was her chocolate eyes. Today, she’s getting something other than a post-it, but I have written it all the same. I have signed them all XOXO, not wanting to give anything away. You can thank my mother’s love of Trisha Yearwood for the idea. I know the song is about a girl who signs her letters with x’s and o’s, but it was the only way I could think of to keep it a secret. I am a full two years older than she is, and I am in college. Not that I ever left home; I couldn’t do that without her.

Ultimately, I chose FSU because it’s less than an hour away. No other school could offer me the peace of mind of knowing I’d be sleeping in my own bed less than a thousand feet from her every night and a full-ride football scholarship. I needed this because I knew that every asshole I’ve somehow managed to keep at bay would crawl out of the woodwork and make a play for her. Fuck that. I’ll never allow another to take what’s mine. This may seem barbaric or savage, but I don’t give a fuck.

No one will ever love her as fiercely as I do. I’d die for that girl, and she doesn’t even know it. Yet. But she will. By God, she will. I tried to be a good guy and let her find her own path in life, but there’s no way that path won’t include me. I honestly don’t even care what it will take to get her. She plagues every dream I’ve ever had and every waking thought. If she knew the thoughts that have been in my head, she’d either hate me or fuck me. I pray for the latter. I pray harder than ever before because today is her eighteenth birthday. Today’s the day I lay it all on the line. My great-grandmother’s gold, princess-cut, diamond solitaire engagement ring is burning a hole in my pocket, and I can’t wait to see it on her finger, currently painted blue and gold, to show her school spirit. She graduates in three weeks, and I know I should wait a little longer—what’re three weeks compared to the last fourteen years? I won’t wait, though. As it is, it’s already been far too long. Far too long of me dreaming of our future together. Of what it’ll be like to finally take her in my arms and kiss her. Hold her. Love her. Get a grip, Davis. If my teammates could see me now, I’d never live this down. None of that matters, though. If I haven’t made it clear enough, there is nothing I wouldn’t do for her. I already worship the ground she walks on and am ready to worship her body as she deserves.