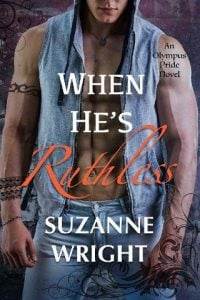 Snatching the black leather wallet from the floor of the fast food restaurant, Blair Kendrick turned toward the guy who was heading for the door. “Excuse me,” she called out, “you dropped your wallet.”

Halting, he half-turned. Slate-blue eyes fixed on her, hard and piercing. Eyes that were familiar to her. Yet not. Curiosity reared up inside her, as did her inner animal.

He squinted slightly, his shoulders stiffening. For a long moment, he simply stared at her, looking like he’d been poleaxed.

Finally, the tension seemed to seep from his body. He slowly came toward her, a brown paper bag held against his chest with one arm. Damn, he was huge. Even taller than her brother. He was also seriously good-looking. Like a movie star or something. And definitely a shifter—he didn’t walk, he flowed and glided, light-footed as a cat.

Maybe she should have felt a little nervous having this big, strange dude come toward her like this, but she didn’t. And she couldn’t explain why.

Stopping in front of Blair, he drew in a breath through his nose, taking in her scent. His own whispered over her. Cat shifter. He smelled like spicy clove and lime wood. That scent … it called to her. Made her feel safe and relaxed, like someone had just wrapped a soft, fleecy blanket around her.

Her inner animal rose with a happy whine. Usually, she didn’t like other breeds of shifter. But the little female wanted to bite the cat and snuggle up to him.

His head tipped to the side in curiosity, and warmth bled into his eyes. They weren’t hard now, but they were still piercing. He was totally focused on her. That was okay. She was just as focused on him.

This close to him, she could sense that he was a born alpha. A real powerful one. Dangerous, too. She wasn’t nervous, though. This man would never harm her; she knew that down to her bones. Because a knowing had hit her mere seconds ago—it came from nowhere, and there was no doubting the truth of it.

“Thank you,” he said, carefully taking the wallet from her, which he then stuffed into the back pocket of his jeans without moving his gaze from hers.

She liked his voice. It was soothing. Smooth and low and deep. “You’re welcome.”

“Blair,” he echoed, as if trying the name on for size or something. “I’m Luke.” He offered his hand.

She easily placed her palm in his. Obviously she didn’t usually talk to, let alone touch, complete strangers—she wasn’t stupid. But he wasn’t a stranger.

His hand enfolded hers, gentle and protective. “You know who I am to you, don’t you?” he asked, his tone calm and easy, but she sensed just how important her answer would be to him.

The set of his shoulders lost more tension. “That’s right.”

She nodded again. “I heard pallas cats are crazy.” That was an understatement, really. In her mom’s words: “they’re demonic bantamweight minions of Satan.”

She shook her head. “You wouldn’t hurt me. And if you tried, I’d bite your face off.”

Surprise flashed in his eyes, and then he chuckled. “You know something? I believe you.”

Just then, her brother sidled up to her, his chest all puffed up. “What’s going on over—” Mitch cut himself off as he got a good look at Luke. “Devereaux,” he greeted, the bluster leeching out of him. He curled his fingers around Blair’s upper arm and gently drew her to him. “What’re you doing with my sister?”

“Sister? Hmm.” Luke rubbed at his jaw. “Are your parents with you?”

“Because I’d like to introduce myself to my mate’s parents and get a few things straight.”

“Your mate’s …” Mitch trailed off, doing a slow blink. He looked at her and then swore. “Are you sure?” he asked Luke.

“Never been more certain of anything.”

Mitch scrubbed a hand down his face. “Mom’s gonna freak.”

Yes, Noelle would. Bush dogs generally didn’t much like other breeds of shifter, let alone choose to mate with them. Also, ever since Blair’s older sister Marianna died a year ago, Noelle had been hyper-protective of Blair and tried holding her too close. Her mother wouldn’t like the idea of Blair ever leaving the pack; ever leaving her.

“Seriously, Luke, she won’t handle this well,” Mitch warned him.

His gaze dropping to her, Luke closed the distance between them in one, fluid step. “You let me worry about that. Everything will be fine. Your parents will accept my place in your life.”