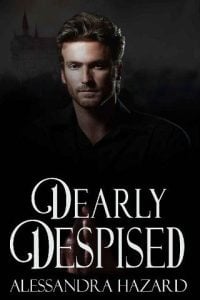 “You will be the king when you grow up.”

Those were the first words his mother said that morning.

Samir was five. His sleepy mind couldn’t understand what she was saying.

Samir blinked, utterly confused. Was Mother talking about the king and queen-consort? They had died months ago.

“Not them,” his mother said, with a strange smile. “The princes. Warrehn and little Eri. They were kidnapped by the rebels.” She added after a moment, “Poor things. They’re almost certainly dead.”

Samir stared at her.

Despite being a child, even he could tell she wasn’t being honest. His mother was glad that Warrehn and baby Eri were gone.

Samir wasn’t glad, but he wasn’t upset, either. He simply didn’t know them well. Warrehn was a lot older than him—ten—so he had never played with Samir. Eri was just three—he was practically a baby—so he and Samir didn’t really play together, either. Besides, there was the fact that Samir and his mother were basically the poor relations. Samir was technically next in line for the throne after the princes, but he came from a secondary royal line that descended from a completely different branch of the royal family tree, so distantly related to the royal family that they might as well not be related at all. The House of Zaver and the House of Lavette had shared a common ancestor eight hundred years ago. Samir was never supposed to inherit.

But he would, if the princes really were dead.

Three months later, the Council of Twelve Grand Clans declared that Prince Warrehn and Prince Eruadarhd were likely dead and named Samir the heir presumptive. His mother was to be his regent until he turned twenty-five.

In the following few days, everyone who was anyone seemed to remark on it. Such a tragedy, people exclaimed loudly before whispering to Samir’s mother, Such luck for your son, my dear.

Luck. Samir supposed that from a certain point of view it really was an insane stroke of luck that he, an insignificant prince from a secondary royal line, had been elevated to the status of a future king. His mother was thrilled, and it made Samir feel a little weird. He loved the large playroom in the royal palace, loved the expensive, amazing toys he suddenly owned, but he couldn’t help but feel like he and his mother didn’t really own them. Like they’d stolen them.

But as years passed, that feeling slowly went away.

He was Samir’ngh’lavette, the future king of the Fifth Grand Clan.

That was how he was raised.

That was who he was for nearly twenty years.

Until he suddenly wasn’t.

And he was coming back home.

“This cannot be happening,” Dalatteya muttered under her breath, pacing the throne room. “A solution. There has to be a solution!”

Samir watched his mother, a strange sort of numbness filling his insides ever since he had heard the news. “He’s the rightful king, Mother,” he stated. He felt… off-balance. As if everything he knew about his world had been turned upside down. Just a few hours ago he had been preparing for his upcoming coronation. He was to be the king when he turned twenty-five, the position his mother had groomed him for since he was five. In fact, he was practically the king already, ruling their grand clan through his mother, who was his regent. But now he was back to being the poor relation. No one.

Dalatteya glared at him. “Stop talking nonsense, Samir!” she bit out. “You’re the rightful king, not him! He isn’t the one who made our grand clan the most prosperous on the planet!” Her beautiful face brightened, her dark blue eyes becoming calculating. “We can use it, in fact. Our people love you, not him. All Warrehn has going for him is his lineage. It won’t be impossible to overthrow him.”

“Mother,” Samir said, glancing around. That kind of talk was dangerous.

But Dalatteya ignored him and resumed pacing, muttering something under her breath.

Samir sighed, watching her twirl a lock of her violet hair as she thought. He loved his mother, he truly did, but she could be a little too much sometimes. He didn’t like seeing her like this. He had known she could be ruthless and calculating, but it was usually for a good reason. This… he wasn’t sure it was a good one. While he did feel upset at his life being overturned again, Samir didn’t feel like he was entitled to the throne the way his mother seemed to think he should be. Warrehn had been the crown prince as a ten-year-old; he was of age now, twenty-nine, almost thirty. He was the rightful king of the Fifth Grand Clan by right of succession. Samir would have to accept it.

It would be a lie to say that he didn’t feel any resentment or disappointment. He did. Of course he did. After fifteen years of preparing for the role and effectively ruling for the past four years, he felt… robbed. Completely blindsided. As if his life suddenly had no meaning or purpose. If he wasn’t the future king, who was he? It had been part of his identity for most of his life. So yes, he was disappointed and upset. But it was nothing compared to the sheer rage emanating from his mother.