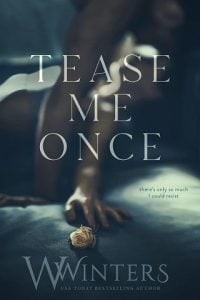 “I said, get on your knees.” My repeated command is murmured in a voice as soft as the dim light in the room. The dark wooden bench beneath her lets out a creak as her trembling limbs move ever so slightly.

She’s still shaking from the last of her orgasm, but it isn’t enough. There is no amount of pleasure I could give her at this moment that would steal the thoughts from her pretty little head.

“You pushed me, Braelynn. What did you think would happen?” The question comes with the leather paddle moving from my right hand to my left. As the light shines down on her, her bare skin is highlighted. With my hand splayed on her stomach, I move her myself, but she’s weak.

The sleepless nights of worry and all the ways this is going to end have destroyed the woman I know.

The curious woman who wanted to play with fire no longer looks back at me with the desire she once had. She’s broken and burned. And it’s all my fault.

Her back rises and falls with each deep breath she takes, her belly pressed against the bench and her fingers gripping the wood beneath her. Is she purposely disobeying? Or is she so lost now that it doesn’t matter what I say … maybe she’s given up.

I haven’t prayed in what feels like an eternity, but if God ever listened, if he ever cared, I pray she isn’t so destroyed that I mean nothing to her anymore.

“On your knees, my little pet.” My words are spoken with a softness that draws her doe eyes to mine. Tears fall from the outer corners of her eyes. Trailing the paddle up the curve of her ass and then higher, her thick lashes lower as she shudders.

Fuck. My pulse races and I swallow thickly from the sight of her.

She doesn’t cry from the pain. It’s because she can’t escape. She saw something she shouldn’t have, and the terror has never been more evident than it is tonight.

She’s slow to move, and just when I think she’ll obey, she’ll give me control, she’ll let it all go and forget about the harsh reality, submitting to the pleasure I can give her, her shoulders hunch over and she buries her face between her forearms on the bench.

The leather paddle clatters to the floor at the same time a sob hits her, ruling this woman in a way I should be. Her cries take over, and the apology she utters is strangled as she covers her face.

Fuck. Not my Braelynn.

With one arm slipping around her waist and the other cradling her reddened ass, I lift her to my bare chest, needing the skin-to-skin contact, heat to heat. My bare feet pad quietly on the floor as I kiss her hair and move us both to the antique canopy bed. The one she picked out. Like everything else in this room, it’s for her. It’s all for her.

The mattress protests as I lay her down gently, careful with my motions as her ass rests against the sheet. Even that gentle graze causes her to wince, but it’s hardly noticeable. All I can see is a woman desperate to stop. For it all to end and for what happened to disappear.

That’s not the way my world works. And I selfishly dragged her into this.

Reaching up, she wraps her arms around my neck, pulling herself closer to me even though I know damn well pressing against the bed like that is only exacerbating the pain she’s feeling.

Again, I remind myself, it’s not the physical pain that’s done this. It’s the threat of what’s to come.

With her breasts squeezed against my chest, her small frame pulled together tightly as she attempts to nestle every bit of her she can against me, I do what I can to calm her.

Shushing her, kissing her hair, rubbing soothing circles on her back. I hold her as close as she needs. As she settles, her body relaxes slightly, but she never stops clinging to me.

“I will protect you.” My promise to her is whispered at the shell of her ear and she stills. My little pet looks up at me and I’ve never felt so cold in my life. Helpless, alone. I’ve never felt like a failure and less of a man than I do when she doubts me like she does.

She doesn’t believe I can protect her. I can barely breathe as the realization takes hold.

“They’re your family,” she whispers. Her gaze says it all: she thinks if they want her gone, I will choose them over her. She’s wrong.

Chills travel up my spine and I rip my gaze away from hers, hating the sight of her uncertainty in me. The only thing that moves in this damn room is the fan, the blades turning over and over as everything else darkens and blurs. Never stopping. None of it ever stops.