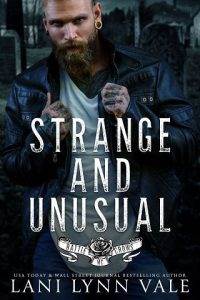 “And how much experience do you have in a commercial kitchen?” the woman doing my interview asked.

I resisted the urge to look at my watch—a habit that I had when things made me nervous. It was a ‘how much longer do I have to be here’ kind of thing, rather than an actual checking my watch for the time kind of thing.

“I have…” I listed off all my accolades, finishing with, “And that was before I spent nearly half my life in a kitchen before the age of sixteen. We made all of our own food from scratch, going so far as to only use our homemade items in every single recipe we used.”

The woman doing the interview looked impressed with that, but luckily, she didn’t ask me to go into more detail.

Giving any backstory on my life was a total downer, and something that I did not want to go into with a potential employer.

“That’s very interesting.” She started to stack her papers neatly. “I’m going to say this now. Jer is a really, really big pain in the ass. I’m only doing this interview for him because he hates doing this part of owning a business. But my brother will be your boss. I like you a lot… but let’s just say, he has final say in everything. He will have to meet you first, but I can give you a call back once he decides that he’ll take you on.”

It was his business, after all.

“Whatever you need from me, I’ll do,” I assured her. “I’m really excited to find a job like this here.”

The woman smiled. “My brother will make you miserable. I hope that you feel the same way after you’re hired.”

After that parting comment, I couldn’t help but say, “I don’t think I’ll hate him at all. Not if we both love to bake.”

An hour later, with the giddiness for life once again surging through my veins, I made one last stop before heading to my rental cottage on the lake.

That stop being the job that I’d landed after hitting town.

I rolled up to the restaurant and parked at the staff entrance, knowing that I was about to be confronted in a way I wasn’t comfortable with.

Erich, my boss, as well as other things that I wasn’t really interested in putting a label on, was the first person I saw and heard as I made my way through the back door.

“Listen,” Erich snarled to the small woman that was all but cowering standing in front of him. “I said ‘whipped.’ Not ‘buttercream.’ Get back there and fucking fix it.”

I gritted my teeth as I made my way inside.

“Oh, so you decided to show up after all?”

I blinked, surprised to hear Erich’s voice so close when just a few seconds ago he’d been across the room.

His hand went to my hip, and I barely checked the urge to throw his hand off.