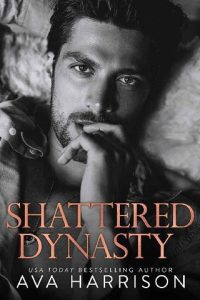 “I am not what happened to me. I am what I choose to become.”

My fingers drum against the surface of the desk. The sound echoes throughout the space, low and steady. A peaceful rhythm at this hour of the day.

I do a lot of my business overseas, so naturally, I am always ready to work when the UK market opens.

Despite the time, the phone on my desk rings. The tone is a blaring contrast to the surrounding silence.

Its shrill sound reminds me of a fire alarm that takes you by surprise.

Without my assistant here, I’ll have to answer. That’s the only way to be sure it’s not a business emergency. Few people know I get here this early.

Only my most important clients.

Still knowing this, I don’t answer.

It stops ringing for a brief second, only to start up again.

Letting out a sigh, I grab my office phone.

“Hi, Mr. Aldridge. This is Larry Baker, your father’s attorney.”

I lean forward in my chair, about to hang up when he continues. “If I could have a minute of your—”

Nothing my father could say would warrant having a conversation with him. After what he did to my family, he’s lucky I haven’t put a hit out on his ass. His days are limited, though. My dad isn’t cut out for jail. Orange is not the new black for that man. I have no doubt that he is currently trying to figure a way out.

Either by appeal or a prison escape.

Knowing the type of men he used to be associated with, neither would surprise me.

Because if he doesn’t get out of there, it’s just a matter of time before he gets himself killed.

He has too many enemies.

The Russian mafia wants him dead.

And I can’t think of a better way to spend my day than at his funeral.

How the hell has he lasted this long?

“Your father called me yesterday, frantic. He wishes to see you,” the sleazebag drawls out. I have never met the guy, but anyone who would represent my father has to be the scum of the earth.

I hang up the phone . . . okay, more like slam it back down onto the receiver.

No matter how often this guy calls me for my father, I have nothing to say to the ass. Moving forward, I’ll screen my calls better.

My dad lost the privilege to speak to me when he tried to sell my sister off in a game of high-stakes poker.

There’s no coming back from what he did.

No apologies. No actions could ever make it okay.

There will be no redemption for him. No amount of money is worth his unforgivable sin. The bastard should have offered his own life first.

I’ll never understand how he could do it. Not just how he could leverage and lose all our assets. No. That’s just money, and in the grand scheme of life, that doesn’t matter. The part that keeps me up at night is how the hell he could do what he did to my sister. He put Ivy on the chopping block. How was that even an option in his head?

But it doesn’t matter because that man, my father, died that day. As far as I’m concerned, I haven’t had a father in the past two years. I haven’t spoken to him since we had him arrested.

The “we” being myself and Cyrus Reed. My brother-in-law. His associates helped, too. Men who’ve become my clients.

We didn’t give the bastard any warning. Stacked evidence of his crimes like they were bricks, and we were looking to build him a new home in hell. We ruined him.

It’ll be a hundred fucking years before he takes a step as a free man unless he pulls strings, which we’ve made nearly impossible. Stripped away any power he possessed—and his willpower in the process.

If by some miracle he manages to get out, we will be here waiting for him. Waiting to strike him down like the scum he is.

A part of me wonders if he is reaching out to me to help him on his quest. He can try all he wants. I wouldn’t help him if the fate of the world laid in his hands. So, regardless of whatever bullshit he intends on spewing, my father is dead to me.

Swiveling my chair to face the windows, I stare outside.

At five o’clock in the morning, darkness still bathes the city.

The only lights that illuminate the sky comes from the buildings. There are no stars.

Which throws my mind into high gear. Why would my father’s lawyer call me this early? The thought weasels past my barriers before I can stop it.