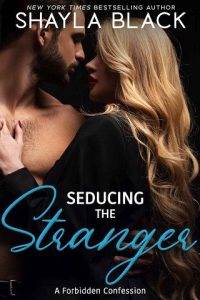 The tall man with the dark beard and even darker eyes striding into the swanky hotel bar might be the most gorgeous man I’ve ever laid eyes on.

I sit up a little straighter in my barstool and cast a sidelong stare as the stranger stops six feet from me. He motions the bartender for a beer, then slams his hands on the bar and hangs his head. I can’t help but notice his hands—big and bronzed with pronounced veins running from hair-roughened forearms to blunt knuckles. Long fingers taper to clean, brutally short nails.

I shiver. I’m in lust. I have a thing for hands, and his are the stuff out of my fantasies.

Though his head is down, nothing about him seems despondent. Or heartbroken. But he’s feeling something… Frustrated? Exasperated?

Finally, he raises his head and stares straight ahead. I glimpse his expression in the massive mirror over the bar. He’s angry. Incredibly, blazingly pissed off. The fury in his eyes should scare me. It could launch rockets and scorch earth.

Perversely, I’m even more aroused. Or maybe that’s just his overall effect on me.

As if he suddenly realizes he’s not alone, he shifts his regard. Our gazes meet in the mirror. My heart pounds. I should look away, let him have a moment of privacy to deal with whatever’s troubling him. But I can’t seem to pry my stare free.

He turns his head, eyes narrowed, and all his considerable attention falls on me. My breath catches.

Has any man ever affected me this way?

The simple answer? No. Never. Not once.

And I’m loving every moment I spend pinned under his stare.

“What?” His confrontational bark startles me. His voice is as rough and merciless as his expression.

He says nothing for a long moment, and I’m convinced he’s going to blow me off. I doubt he’s feeling conversational. And I’m sure the zing of attraction is completely one-sided.

Finally, he growls, “What’s your name?”

His gaze dips to my nearly empty tumbler. “What are you drinking, Calla?”

Just then, the bartender sets a frosty mug of some dark, imported beer in front of the gorgeous stranger. I realize then he never told me his name.

“Get her another,” he tells the bartender.

I should refuse. I came off the plane from LA three hours ago, and I still haven’t eaten lunch. I know without looking that dinnertime is fast approaching and I should find something to fill my stomach before I drink more. But if this shiver-worthy stranger is buying me a drink, I’m going to smile at him, partake, and continue to stare my fill.

When the bartender steps away to mix my cocktail, the gorgeous man cocks his head. “Has anyone ever made you furious beyond words?”

I consider his question. While I had a college roommate who came close once… “No.”

But disappointed me? Oh, yeah. All the time.

“So you don’t have any advice?” He gulps half his beer, giving no hint that he’s actually enjoying it on the way down.

“Other than to say it’s not smart to try drowning it in booze, no.”

He grunts before he downs more of his brew. “I should have guessed you’ve never been that angry. You’ve got a halo.”

“What does that mean?”

“The overhead lights reflect off all your shiny blond hair. When I walked in the door, it was the first thing I noticed. Makes you look like you have a halo.” His eyes narrow again. “You’ve got an angelic face to match.”

Is that a compliment or a sneer?

The bartender sets my fresh drink beside the empty one, then sweeps the first tumbler away. I see a smile lurking at his mouth before he disappears into a back room, leaving me alone with the surly stranger.

He raises an inky black brow and studies me so intently I have to struggle not to squirm under his gaze. “You’re under twenty-five. You have a steady job. Your apartment is somewhere between clean and spotless. You’ve probably never had more than a parking ticket. And”—he leans in, dark eyes drilling down through mine as if he can read my mind or see into my soul—“I’ll bet you’ve had fewer than five lovers. You’ve definitely never had a one-night stand. Where I come from, that basically makes you an angel.”

My mouth hangs open. Yes, I’m gaping, but…how did he guess so much about me? “What makes you think all that?”

“More than fifteen years in law enforcement. You get good at reading people. You going to try convincing me I’m wrong?”

“This isn’t about me.” I clear my throat. “I’m sorry if I butted in. I saw you were angry, and I asked if you were okay. If you don’t want anyone to care, then I won’t.”

Finally, he slides onto the stool next to mine and polishes off his beer. The heat of his thigh close to mine makes it hard to focus on anything except him.