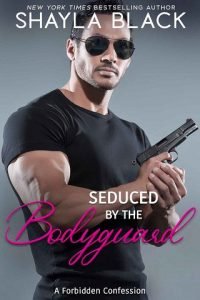 Today is already hotter than the underside of Hades, but it’s also Independence Day. My agent, David, insists that hometown-girl-made-good appearing in one of the biggest parades in Texas is a great grassroots way to spread the word about my new single and my upcoming album, so I said yes. Besides, I’ve traveled the globe for the better part of a dozen years. It’s awesome to spend a day near home, surrounded by the smell of smoking brisket and the sight of people waving Old Glory again.

“Ten minutes,” David proclaims as he sticks his head into the little bathroom at the back of one of the shops at the top of the parade route.

Of course he’s wearing a suit, despite the fact it’s a hundred degrees today. And he looks impeccable doing it. The man is a stickler.

“Thanks.” I check my red lipstick in the dingy mirror.

This is as good as it’s going to get. My sparkling red minidress is an attention-getting showstopper, but the Stars-and-Stripes stilettos really spur a double take. I feel a bit like USO Barbie…who suddenly decided to walk a street corner.

Then again, it matches my new image. Gone is my squeaky-clean child-star persona. Now I’m an adult—and David never misses an opportunity to remind people that puberty hit me hard and fast by dressing me in things that cling to my ass and show off the fact I very definitely have boobs. It’s annoying…but I can’t argue with results. It’s working.

I’m just not sure I care anymore.

Another problem for another day.

“I’m ready,” I tell him as I hide my liquid lipstick in my cleavage.

When I look up from tucking the tube between my breasts, there’s a stranger standing beside David, watching my every move. I would feel ridiculous…if he hadn’t knocked the breath from me with a glance.

Holy sex drive! He’s a man, for sure, but he’s also as gorgeous as a god. He’s unbelievably tall with shoulders almost as wide, and he has eyes as dark as midnight. He’s wearing a black T-shirt that hugs the bulges of his biceps and exposes tattooed sleeves down both arms. Black denim and black boots complete the look. He’s going to swelter in today’s heat…but he’s going to look damn fine doing it.

David intervenes. “This is Rand Garrison, your security detail for the parade.”

The word doesn’t seem like a mere pleasantry. In fact, I’m hard-pressed to believe this man would bother with silly things like decorum or etiquette. I’ve met his type before—very serious and convinced he’s one of the people who stand between order and chaos in this dangerous world.

“Where’s Rob?” I ask about the guy who’s my usual security detail.

“Tossing his cookies like he’s doing a reenactment of The Exorcist. So you’ll spend the day with Rand. Former Marine and most recently a Dallas SWAT captain. Any questions?”

For a two-hour gig full of lip-synching? “No.”

“Great.” David claps his hands together impatiently. “You look fetchingly patriotic. Shake what God gave you for Uncle Sam, and you’ll do great. I’ll be waiting for you at the end of the route with Graham.”

Graham Normoth, the new British pop sensation with a velvety voice and sensitive face. Women all over the globe swoon and scream for him. Probably because they don’t know the minute he’s alone with a woman he suddenly grows six hands and a tongue like a Hoover.

“He flew in last night and wanted to surprise you, but jet lag and traffic and whatnot. He told me he can’t wait to see you after the parade.”

“Oh, great.” I do my best to sound chipper, but I’m pretty sure David knows I’m not happy.

Rand steps back and into the glow of overhead lights. He’s got a wide diagonal scar through his left eyebrow. The damage skipped over his eye, then sliced its way down his cheek, stopping just short of his mouth. I’m blinking and staring stupidly when he gestures me out of the doorway and into a deserted hall.

David hangs back, watching as Rand settles a big hand as hot as a furnace at the naked small of my back, above the backless dress’s scooped edge, before he smiles.

What are you up to?

I don’t have time to ask before Rand hustles me out of the little shop and guides me down the back of the parade route, flanking me as he escorts me to my waiting float, all while maintaining that hand on my bare skin. It’s all I can do not to shiver at his touch.

“Do you know where I’m supposed to go?” I ask to cut the tension.

“Do you know the parade route?”

“Did David arrange for you to ride the float with me?” It’s a genuine concern since I’ve had a few incidents over the years that rattled me.