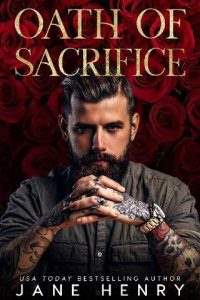 A bead of sweat rolls down my back. I scowl at the landscape that most would find beautiful—rolling green hills that overlook the Rossi family vineyard, almost ethereal with the setting sun. The air’s pregnant with the sweet scent of ripe grapes.

I yank at my T-shirt and pull it off, wipe it across my brow and ball it in my fist. A cool wind skates across my sweat-slicked naked chest. I’ve grown a beard, gotten more ink, lifted more in Tuscany.

What the hell else am I gonna do?

September’s usually the time of year they tell tourists to come to Tuscany, instead of during the hellish, stifling August heat, because the weather’s begun to cool. But not this year. This year, September’s started off almost as hot as August.

Others might see this as a gorgeous landscape, a little slice of heaven, really.

This vineyard’s my fucking prison.

Bare-chested, glaring at the ripe vines that sprawl before me, I want to pound my chest and scream like motherfuckin’ Tarzan. I want to claw at the rose tats on my arms, the stark, vivid reminders of who I am.

A reminder of the oaths I took.

The ones they know about.

And the one… they don’t.

I turn my back to the vineyard and stare at the sprawling estate before me, only one of a number of places the Rossi family owns in Tuscany. I once had a place here in Italy, a place of my own, but I sold it when Romeo banished me to the vineyard. It only mocked me with its vacancy and opulence.

Now I have an apartment here at the vineyard, where I oversee operations.

A part of me wonders if I’m here because Romeo wants me as far away from his family in America as possible.

Romeo, who’s like a brother to me. My Don.

He knows I don’t like to sit still and never have. He knows I like to get my hands dirty, whether that’s changing the oil in one of my cars or breaking legs as punishment for a crime committed against the family. Romeo knows that the best way to really punish a guy like me is to take him away from anyone who matters and to make him do fucking menial labor.

As I head inside, a car pulls up the long drive. It’s hard to see with the setting sun, but I cover my eyes to block the sun’s rays and try to see. Ah. One of Tavi’s, then. He’s come to pay a visit. I wait, but he’s busy on his phone so I give him space.

Tuscan homes are rustic and sturdy, many built centuries ago. The home set at the vineyard’s no exception. Stone columns and benches line the walk to the main house, the most modern part all the recessed lighting and spotlights in the garden. Here, the smell of ripe grapes fades a little.

Laughter comes from inside the kitchen. Maurice, an older guy who’s cooked for the Rossi family for decades, makes magic in the kitchen, unless Tavi’s wife Elise is here. Elise can cook her ass off. But Elise is pregnant, and hates flying on a good day, so Tavi’s got her home with The Family.

I wonder why he’s here.

Another burst of laughter floats through the warm evening air. I clench my fists. It’s been way too fucking long since I’ve had a chance to talk with brothers of my own, to feel like I have a tribe that actually welcomes me. I know what’ll happen if I go to the kitchen.

I’ll find Maurice regaling staff with tales of his many exploits from when he was a young guy in the Italian Army. It’s how he met Narciso, the late Don of the Rossi family , and how he got the job here. Kitchen help in the Army.

They’ll be sitting around the large, rustic kitchen table with their pints of ale or glasses of wine, probably with a heavy antipasto plate in the center of the table. Maurice is famous for his antipasto boards—handmade cheeses, meats, olives cured from the Rossi’s private collection, with jams and dried fruits. They’ll drink and eat and talk in perfect amiability.

Until I walk in.

Tavi’s still sitting in his car, probably catching up on emails.

I decide to test my theory.

I amble toward the kitchen. Sure enough, the whole crew’s sitting around with their drinks and food, and Maurice is speaking animatedly in Italian, waving his hands for dramatic effect. He winks at me and continues his tale. Maurice has known me since I was ten years old, and he isn’t afraid of me.

I stand against the doorframe, leaning my hip against it to listen to him.

“And the girl, she says, buddy, you want more than one tonight? I’m a triplet.” Snickers and chuckles. Maurice waggles his eyebrows. “And I say to her, I’m glad you told me. Thought I was seeing triple. Still, I only got one dick, sweetheart.”