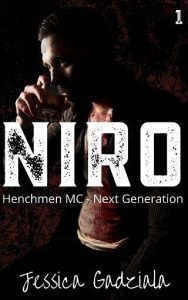 My phone screamed through the quiet in my room. It was well past three in the morning. Whatever was on the other end of the call couldn't be good news.

I reached for my cell on the nightstand, sliding to accept the call without glancing at the screen. Eyes still closed, a part of me still chasing sleep, hoping this wasn't some sort of club emergency when I'd only gotten an hour of sleep after being talked into staying up all night having a party at the clubhouse with the other next-generation guys not old enough to hit the bar yet.

"Yeah?" I rumbled into the receiver.

Andi was calling at three in the morning, her voice shattered splinters of sadness all around.

My stomach knotted as I folded up in bed, reaching to turn on the light. "Andi? What's the matter? What happened?"

Andi was pure softness. She kept her bleeding heart right there on her sleeve. I'd once caught her sobbing over a wild baby bird that had drowned in a bucket of water it had likely been trying to drink out of.

She could have been driving, and tried to avoid hitting an opossum, but accidentally killed it.

She could have witnessed a couple having a break-up fight.

You never knew with her.

But she felt it all.

And she felt it down to her soul.

It was one of her most endearing traits, something I envied at times, something I felt deserved to be protected at all costs. Hell, I damn near applied to her college just to go with her, to be able to keep protecting her.

One, my future didn't involve a college degree. Bikers tended to get by just fine without one in our neck of the woods. And I needed to prospect, make my bones, get myself patched in so I could start making a living for myself.

I had to let her go. Go to college. Go away from me.

I simply had to let her go.

She would never be mine.

I had to live with that.

Even if accepting that seemed like jumping into a dark well with unknown depths of hopelessness, a prison of sorts that I could never hope to climb back out of.

"Tell me something happy," she demanded, sniffling.

That was her favorite phrase.

This, clearly, was the latter.

"Your mom took in seven baby bunnies. Someone's dog brought them to the owner one by one, and she couldn't find the nest to put them back. So now she's raising them. I saw them when I went to pick up Nugget from his play date. They still have their eyes closed."

Andi's mom was our town's resident crazy animal person. She was known for rescuing and adopting out, rehabilitating and releasing, or giving sanctuary to every sort of animal in need. And because her husband was one of my biker brothers, the clubhouse was often full of some creature or another. A cockatoo that liked to chew on all the wood and scream at the top of his lungs. A three-legged dog who refused to accept that he wasn't capable of jumping up on the couch like the rest of the dogs. A snake that once got loose and burrowed into the heating system for two days before we finally found out where it was and got one of the bikers' kids to go in and grab it.

"That's not happy," she told me, sounding sadder than ever. "The poor mama was probably looking for her babies. They do, you know. Animals aren't as heartless and dumb as people think. Mama bunnies will spend hours looking for them, thinking they just got away from the nest somewhere. It's devastating to think about."

Yep. That was an angle I hadn't considered. And I was out of other ideas. Nothing in my life had been very bright. At least not since she went away, taking the fucking sun with her, it seemed.

"Tell me what happened," I demanded instead, knowing she was someone who always needed to talk it out, to purge the pain so she could move past it.

There was a long pause, long enough for me to check to make sure the call was still connected. Then, with a cracking voice, she told me.