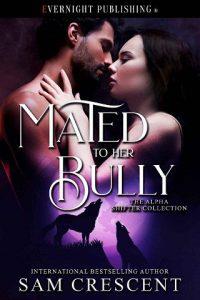 Mabel Little came out of the clearing, grasping her side while tears filled her eyes. This couldn’t be happening to her. There was no way the fates could be so cruel. She refused to believe it.

The pain she’d gotten from running past a torn branch was already starting to heal, but that was beside the point. The moment she realized what was happening, she’d taken flight.

Perching on the edge of another fallen tree, she held her side and swiped at her cheeks as the tears started to fall.

Knew he was close.

The rest of their pack would follow, and if she didn’t control herself, it would be another spectacle she really didn’t want to be part of.

Within seconds, he was there. Lucas Naul. The biggest bully and asshole within the entire pack. It also didn’t help this very same guy was in line to rule. He had Alpha blood running through his veins, seeing as he was the Alpha’s oldest son.

She got to her feet and tried to hide her body, but it was impossible. Even though she didn’t want him to see her naked, there was no helping it. They were both eighteen this month. Both expected to go through the transition from human into wolf. She’d been so afraid, she’d done extensive research, and much to her surprise, there hadn’t been any pain. Just this natural instinct as the moon filled the sky. She’d been outside waiting. Her parents had advised her to remove her clothes before it happened. There was no reason to keep the garments as they were torn into shreds immediately after.

After finding a private location, she’d stripped down and waited for what was to come. What she’d been preparing for. The moment it had arrived, she’d felt so free. Her wolf was finally out and able to run, to play, to do whatever the hell she wanted to do. Her parents had always told her this was how it would feel. She didn’t realize how thrilling it would be.

For the first couple of hours, she’d explored the forest, running, freeing herself from the burdens of her human skin.

Then, it had happened. She’d come upon a scent that had made her stop. When she turned, it had been there, the presence.

Pulling out of the sick memory, she glared at Lucas. “You stay away from me.”

“God damn it, Mabel. This isn’t the time for games.”

“You don’t want to stay and talk about this?”

Mabel glared at him. “I don’t want to have anything to do with you. I hate you.”

She shook her head. “Believe me, it’s true. I want nothing to do with you. Ever.”

He grabbed her arm, pulling her close, forcing her to stare into his eyes. “You feel this.”

“No matter what I feel, do you really think I would ever succumb to it? To allow myself to be mated to you? You’re an asshole and the biggest bully there is.” She shoved him away and whimpered, grasping her side. “Whatever this is, it’s a cruel trick, and I want nothing to do with you.”

“Mabel, you’re my mate. You can’t run from me forever. You can’t deny this.”

She turned to look at the man who’d made her life miserable for as long as she could remember. “Watch me.”

Mabel was tired. This always happened after she’d spent a prolonged period of time in the city. As she rubbed at her temples, her skin no longer felt like her own. The need to unleash her wolf was so strong, but the disaster of what happened on her initiation into the pack had led her to make the decision to continue her education as far away from the Naul pack as possible.

The small town where they lived was rife with sordid rumors about what happened that night. Her parents had even tried to stop her from leaving, but she’d ignored them. Leaving town not long after your first change wasn’t heard of. You usually needed the pack, and the truth was, she did. She wanted them desperately, but not at the cost they wanted her to pay.

Being mated was considered the best thing to happen to wolves. To find each other at a young age, a true gift. She didn’t see it as a gift. Far from it.

It was nothing short of a curse. One she didn’t thank anyone for and didn’t care to either. She wanted to be as far away from it all as was possible.

More importantly, she wanted to be as far away from Lucas as was humanly possible. With the pack trying to mend their mating, she had no choice but to leave. Even his siblings had tried to help. When his brother and sisters tried to bring them together by making her feel guilty, it had been the final straw of an already long and tedious summer. She’d left.