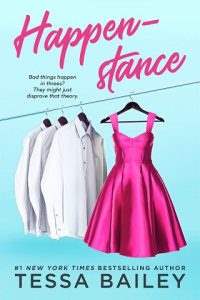 From #1 New York Times bestselling author of It Happened One Summer comes a romantic comedy about an accidental relationship between three smitten men...and one commitment phobic woman.

Elise Brandeis has never won a Pulitzer—and she never will. At least not while she’s delivering sandwiches at the Gotham Times, instead of working there as an actual reporter. Her only shot at seeing her byline in print is to prove to the no nonsense managing editor that she has a nose for news. And she’s got just the story to grab her elusive attention.

Right after she delivers this turkey on ciabatta.

Chasing down leads brings Elise to Roosevelt Island, but just when the trail of clues begins to take shape, she gets stuck. Literally. On a cable car with three strangers who couldn’t be more different. An uptight rugby coach, a construction worker and a former adult film star she pretends not to recognize a little too well.

At first, Elise wants nothing more than to be rescued ASAP.

An hour later, everything has changed. By pure happenstance, four separate journeys have collided in an intense, meaningful way. Suddenly, disentangling their lives feels more impossible than winning that Pulitzer. Good thing Elise is too busy proving herself at work to consider three boyfriends. Nobody has time for that—even if they make giving in feel oh so right. But three heads are better than one and these loners will teach themselves to work together to win Elise over forever…

And more importantly, keep their dirty socks off her floor.

Roosevelt Island is a weird-ass place.

Being that my life is in a weird-ass place at the moment, I seem to be in the right spot.

I shift in my stool near the window of the pizzeria, careful to keep most of my body partially hidden behind the cinderblock pillar in the center of the dining room. I’m the only one in here, even though it’s dinnertime, making it pretty difficult to blend in. When I lean back slightly, I can see the group of men across the street, although they’re obscured by foliage and a strategically parked van.

Definitely up to no good.

There’s a tingle at the center of my spine and I twist in my seat to find the pizzeria owner glaring at the half-eaten slice of pepperoni sitting in front of me.

“Something wrong with the pizza?”

“No, it’s great.” I take an exaggerated bite to prove I’m telling the truth, even though it’s thoroughly mediocre. “I’m just a slow eater.”

He goes back to filling the red pepper flake shakers.

Truth is, I’m on my first stakeout and my stomach isn’t what you’d call settled. And speaking of stakeouts, picking this sparsely populated island to surveil New York City’s deputy mayor was a rookie move. Accessible only by ferry or tram, Roosevelt Island is a random strip of land in the middle of the East River, in between Manhattan’s east side and Queens. The main attraction—besides the view of the city skyline—are the ruins of a smallpox hospital, so, you know. There aren’t crowds of people flocking to see the sights. Not the best place to be inconspicuous.

Why am I here?

I certainly wasn’t assigned this mission by anyone in a position of authority.

I guess you could say I’m a rogue sandwich girl.

I’m using my illustrious position as deliverer of deli meats to get my foot in the door at the Gotham Times, New York City’s most respected newspaper. I couldn’t just start off with a smaller paper, like the Village Voice or the Brooklyn Eagle. Not me.

Elise Brandeis aims right for the top—and she never quite makes it.

That doesn’t stop me from trying, though. Especially not now when my tank of ambition has dwindled down to a measly few drops.

The bite of pizza gets stuck halfway down my throat and I gulp hard to swallow it. Stop feeling sorry for yourself and focus on the task at hand. I’m in the middle of rousing my motivation when the deputy mayor steps into view—and I see them.

I see both of them together for the first time.

Two men who really, really don’t want to be seen together, especially by me—a wanna-be reporter. Which is obviously why they chose to meet on Roosevelt Island, home to a bunch of empty parks and eerie sculptures. The two men cast wary glances over their shoulders and I duck behind the cinderblock pillar before they spot me watching them. When I venture another peek, they’re shaking hands. Holding my breath, I swipe open my phone to snap a picture, but the pizzeria owner blocks my view, slinging a white towel over his shoulder and planting his hands on his hips.

“You don’t like the pizza. You want something else?”

“It’s honestly great pizza. I’m just…” I get my camera app open and raise it above the man’s shoulder. “Look at this amazing sunset. I need to get a picture.”