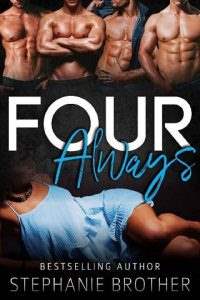 I have a secret. Four of them, actually. They’re big and strong and make their living taking off their clothes for adoring fans. But they’ve been giving me private shows for free.

When an innocent bakery delivery ends in me being surrounded by four hot male strippers, I don't stand a chance of resisting them.

As a plus-size woman, I’m used to being overlooked by men, but the Stanton brothers dazzle me with their playful charm, piercing eyes, and gorgeous muscles.

Maddox loves to make me laugh, but when it comes to worshiping my curves and giving me pleasure, he doesn’t fool around.

Diesel and Dodge, twin stars of the male revue, make me feel like I’m the only woman in the room even as they perform for huge crowds.

Chase is the type of man who goes after what he wants, and he makes it clear that the five of us being together is his goal.

I can’t get enough of them, even though I have to sneak around to see them. My ultra-strict parents fought to keep their club from opening on the island, and will go off the deep end if they find out I’m fooling around with the owners.

So the four men and I share stolen moments and plan secret rendezvous, which only makes being with them even more exciting.

I’ve known from the beginning that it can’t last, but the brothers don’t just want a fling — they want a relationship with me and they want the world to know about it.

Being with the men would mean choosing them over my family. When chasing a happy ever after destroys everything else in your life, can it ever be worth it?

Four Always is book 8 in the FOUR Series, standalone reverse harem romances with characters who continue to make appearances.

Yesterday the display case was filled with black cats, ghosts, and jack-o-lanterns, but today the pumpkins don’t have faces, and they’ve been joined by colorful leaves and acorn-shaped cookies.

Halloween is over, but fall is still in full swing. Instead of business being slow today, a lot of customers came in to preorder their pies for Thanksgiving. While they were here, most of them also bought fresh bakery from the case, and as a result, there isn’t much left.

One of the many things I love about working at Maddy Lewis’s shop is that our unsold bakery is donated to a different charitable organization every day, among them an assisted living home, the Four Points hospital, the fire department, and the animal shelter. Of course, the sweets aren’t good for the animals, but the administrators and volunteers, of which I am one in my spare time, sure do appreciate the tasty donations.

Today’s treats are going to the women’s shelter in Whitman, and I’ll be delivering them when my shift is over. The bakery is already closed for the day; I just need to clean up before I leave.

I’m tying a ribbon around the box of goodies when someone knocks at the front door. To my surprise, there’s a small crowd outside, and I prepare myself to disappoint them by telling them they’ve arrived too late, when I see a familiar face among the group.

“Hi, Lacy,” I say, greeting Maddy’s best friend as I open the door. “C’mon in.” There’s another woman with her, along with a large group of extremely handsome men. One of the men is holding a young boy who has adorably chubby pink cheeks, who I know is Lacy’s son.

“Hi, Jade,” Lacy says. “Have you ever met my sister?” When I shake my head, she introduces me to the woman, who is named Bianca.

“Nice to meet you,” Bianca says, shaking my hand.

“And these are my partners,” Lacy continues, pointing out four of the men, “Ash, Derek, Landon, and Nathan.”

A few of them look familiar; I’m sure I’ve seen them in the bakery before, but I didn’t know they were Lacy’s men. I step closer to Landon, who’s holding their child.

The little boy makes sounds that aren’t yet identifiable as words as he smiles back at me.

“And these are my sister’s partners,” Lacy says, pointing out the other four men, who nod in acknowledgement, “Knox, Logan, Cade, and Ryder.”

“I thought we’d made it here before closing. Sorry about that,” Lacy says as the group files in.

Lacy’s smile falls when she sees the empty bakery case, but she’s probably aware that we box up the day’s unsold items. “Any apple fritters left?” she asks hopefully.

“No, sorry,” I say. “Those almost always sell out early.”

“Don’t worry, Lacy,” Nathan says. “I’ll come down early tomorrow and get a boxful for you.”

She flashes him a huge smile and squeezes one of his sizable biceps.