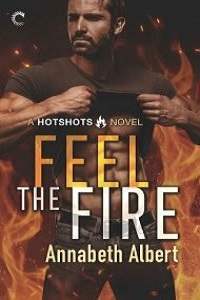 “You want me to go where?” Luis paced the narrow length of his boss’s office, ignoring the visitor’s chair in front of where Rosalind sat. His pulse alternately revved and sputtered, struggling to keep up with the freaking live grenade Rosalind and the Forest Service had just lobbed into his life.

“Central Oregon. The Painter’s Ridge air base is there along with an interagency hotshot crew and, of course, a large forest service office. It’s a big operation.”

“I know what’s there.” Even now, he could picture exactly what was there—endless sky, big ranches, surprising number of cowboys, and Tucker. But not the Tucker of his memories. Chestnut hair. Gap between his teeth. Floppy hair over his ears. Penny in his sneakers. That boy was gone forever, replaced by a fully adult Tucker, who undoubtedly had a happy wife, happy life, maybe a half-dozen kids by now, all with Tucker’s damn smile. That boy—man—had roots as deep as a two-hundred-year-old fir in that area, and no way was Luis getting lucky by him having moved away or something.

“I had a feeling you might. You grew up near there, right?” She gave him an encouraging smile, sun glinting off her short gray hair. She was one of the few in the building with a window in her office. Usually he enjoyed visiting her and her collection of houseplants and stacks of forestry manuals, but not today.

“Something like that.” His voice was probably terser than Rosalind deserved, as they’d been good work friends before she’d taken this promotion, but damn, he was still reeling. “I grew up in Riverside mainly, but we spent some years up in Oregon when my dad was transferred there to manage a new bank branch. All my family’s back here in California now though,” he added in case she was under the mistaken impression that he was pining for the area. No, he’d gotten all the pining out of his system years ago and all that was left was a bitter, ashy taste and a major distrust of toothy grins and careful promises.

I promise to write.

“Hmm.” Rosalind’s mouth twisted. “I’m not saying this assignment will be easy. Extended travel is never fun. And I’m sure your family will miss you. You’re not seeing anyone right now, are you?”

Ah. There it was. The real reason Luis was being shipped north. In a large office with several fire behavior specialists, he might well be the best, but he was also the only single guy, only one without kids. And that made him expendable. This wasn’t the first time the forest service had loaned him out to a region with great need—he’d spent a few weeks in northern California last year, and in Montana with the big national park fires the year before that. But fucking Oregon? That he wasn’t prepared for.

“If I say yes, will that get me out of this?” He gave her his best smile, but she simply sighed.

“Sorry. I know this is short notice. But you’ll get the travel per diem. If you’re frugal with food, that can be a nice little bonus for you, maybe?” Her dark eyes pleaded with him to understand and not make her day that much harder. And anywhere else in the country and he’d already be back at his desk, making arrangements. But this was Oregon and he was going to dig his heels in.

“I’m not worried about the money. But you’re saying this could be more than a couple of weeks. I’ve got...” He cast around for some good reason. His coworkers had softball games and kid day camps and family reunions this time of year, but he was rather low on excuses for himself. A hollow feeling bloomed in his chest as he tried to remind himself that he liked his life, liked his freedom from entanglements and encumbrances. After Mike, he hadn’t wanted anything to do with domestic bliss, not ever again. And sure, he had a social life, but nothing he could point to as a commitment. Those he stayed away from. “The cat and—”

“You took her with you to Mendocino. I remember.” Smiling, she shook a finger at him. He’d let her assume he was an indulgent pet parent instead of a guy who was reluctant to pay sky-high pet-sitter fees while he was stuck with someone else’s cat. “We’ll make sure we find you a pet-friendly extended-stay place with a kitchenette. I know you like to make your own food. And assuming you want to drive it, I can arrange mileage too.”

“It’s thirteen hours, give or take.” He’d had that number memorized for decades now, dating back to when it had seemed to matter with life-and-death urgency, each mile an endless chasm between him and what he really wanted. But now it was simply a scar, a wound he’d rather not acknowledge, let alone reopen.