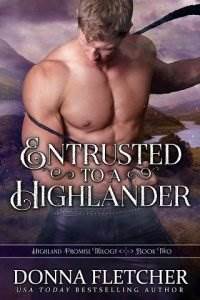 Purity let out a scream that echoed through the forest and had the birds fleeing the treetops as she threw herself at the large dog she had raised from a pup these last five years, shielding him from the arrow meant to kill him but instead grazed her upper arm.

“Stay, Princess,” she ordered the growling animal, struggling to free herself from Purity’s hold and defend her with her life. If it were one man, she would release her, but three had come upon them suddenly while she foraged in the woods and, though Princess was large, she was no match for the men with swords and bow and arrows. At least not until… “Wait for King,” she whispered to the dog.

Purity stood, keeping a growling Princess behind her. “What do you want?”

“You!” The largest of the three men, thick in the chest and arms—not so his legs—pointed at her. “You’ll fetch a decent price.”

The skinny man with the bow and arrow scrunched his brow as he turned to the large man. “But we already—”

Already… what? Purity wondered over the unfinished remark. What had Quiver meant to say that had the big man ordering him to hold his tongue? And what had brought the men so deep into the woods? This area saw few travelers.

With a sharp snap of his head, Quiver turned away from the man, mumbling beneath his breath.

“We need to rid ourselves of the dog, Reid,” the other man said, impatience stinging his words.

Fear continued to grow in Purity, prickling her skin. The thought of possibly losing Princess tore at her heart but also angered her and sparked her courage.

“I’ll not be going with you and I suggest you, eejits, leave before death takes hold of you,” Purity warned.

Quiver’s head appeared as if it swiveled on his shoulders as he looked around to see if death itself had materialized and was there waiting for them.

“Quiver’s the only idiot here,” the man said with a grin.

“You’re right about that, Owen,” Reid said with a laugh.

Purity hated that they took delight in what they intended. It meant they were an ignorant and heartless lot, unperturbed by others’ sufferings. Pleas and threats would make no difference to them. She knew well these type of men, having seen the destruction they could cause. They made one mistake, though, they had thought her easy prey since she was a woman alone.

“I won’t be going with you,” Purity informed them again, quite strongly this time.

Quiver was the only one who didn’t laugh. He was still too busy glancing around for death. The two fools might think him an idiot, but he had been wise enough not to dismiss her threat.

“You are more foolish than I thought. It will be easy to defeat you,” Purity said.

Reid and Owen laughed again, but Quiver stepped back away from the two.

“Quiver will take your dog down with one shot of his arrow,” Reid said.

Purity glared at the man. “Not before she tears your throat out.”

Reid’s hand went to his throat as if he could feel the dog’s fangs ripping into his flesh. “Quiver would get him first,” he argued.

Purity laughed. “I would think twice on that since I believe Quiver got his name for a reason.” She pointed at the man. “He quivers when frightened, not a good trait for a marksman.”

Reid and Owen didn’t even turn to look at Quiver, though the annoyed looks they exchanged proved Purity’s observation.

“Quiver will do what needs being done and there is still Owen and me. There is no way you can best us.”

Purity smiled with confidence. “Not on my own.”

“She has help,” Quiver said and took several anxious steps away from them, his eyes continuing to dart nervously around.

“Do not be a fool. She puts doubts in your head,” Reid snapped.

Quiver gasped. “She learned magic from that witch that once lived here. They say her magic still roams these woods and is the reason no one dares travel this way.”

“The man, Quiver, is wiser than he appears,” Purity said, seeing that Quiver appeared ready to flee, and hoping to encourage him, then that would leave only two men to contend with.

“Quiver is a fool who knows nothing and obeys orders,” Reid said with a curt tongue. “And I will argue with you no more. Quiver, see to the dog once we get hold of the woman.”

Purity was quick with her words, though they were not the truth. “The dog belongs to the witch. She will not take kindly to him being harmed.”

“You’re useless,” Reid spat. “My wife—your sister—warned me not to take you with me. For once I should have listened to her.”

Purity thought King would have returned by now, though he’d been annoyed with her when he had walked off this morning. He could be temperamental and when irritated he’d go for a wander, ignoring Purity and Princess. However, her scream should have brought him here by now. A sudden catch to her chest had her fearing something had happened to him.