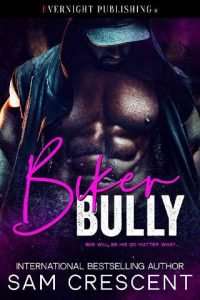 Chloe Decker sat on the park bench outside of school, waiting for her father to pick her up. She didn’t know why she bothered waiting for him. It wasn’t like he ever showed up on time. More often than not, he forgot, but that’s what she got all the time from her dad. Her father, Kurt, was none other than a Satan’s Crew MC lackey. They would never give him prospect status. Whenever she was near any of the MC club members, she always heard the lingering insults of “coward” thrown his way.

She tried hard to spend as little time as possible around the club. It helped that her mother didn’t like it and would often avoid the family gatherings her father kept trying to pull them into.

“Look at it, if it’s not fatty Chloe sitting on the bench. I bet the wood will bend and snap.”

Chloe stared down at her book. She didn’t need to look up to see it was Alfie Pace and his other MC brat goonies who were near her. They liked to take their time making her life a misery, and she had no doubt it was because of who her father was.

Ignoring them was easy. Most of the time they moved on, but not today.

Today she had a banana skin thrown at her, and she groaned, getting off the bench. She didn’t need to wait for her dad. He was supposed to be taking her out to get new boots, but she’d rather walk home than have to put up with this kind of crap.

“What’s the matter, fatty? Don’t want to eat it? Shouldn’t a fatty eat everything that’s thrown at her?”

Forcing herself to look up, she stared into Alfie’s sharp blue eyes. She hated this guy more than anything else in the world. For as long as she could remember, he’d been mean to her. He never had a nice thing to say to her, and part of her often wondered if he thought he was better than she was.

His father, Eagle, was the president of the Satan’s Crew MC, and he was a merciless bastard. She’d seen him hit his son a few times. One of the first times she saw Alfie, he’d been thrown across his father’s knee and spanked so hard. He’d screamed the clubhouse down until he finally apologized for whatever misdemeanor he’d done.

When she’d asked her father later that night what could have possibly earned such a harsh punishment, she’d been told “club stuff.”

Which probably meant her father didn’t have a clue what was going on either, but he liked to pretend he had a place.

She didn’t say anything, but she’d have to pass them to make her way home. The last thing she wanted to do was get anywhere near those guys.

There was no way she was going to be able to avoid it.

Heart racing, she stepped on the path and began to walk toward them.

“Whoa, be careful, the ground is shaking,” Ian said.

“Look at everything wobble while she moves. Be careful. She’s going to eat you,” Riley said.

There were only two other guys with Alfie, so she should really count herself lucky.

When she was only a couple of steps away from him, she stopped.

“Seriously? That’s all you got? You’re going to bully me on my weight or how about my looks next? You think I haven’t heard this all before? You guys are pathetic,” she said.

She spent way too much time trying to get along, pretending they weren’t horrible people, but she was done being nice.

She was done being the girl that allowed them to get away with shit. Tonight was the last night she ever trusted her father to actually pick her up and take her to get boots. Once her mother heard what happened, there would be fucking hell to pay, but until then, Chloe was pissed off, angry, and just wanted someone to scream at.

Why go and throw herself on her bed and allow the pillow to take the blame when she had three men standing right in front of her? They weren’t men.

Throwing her bag to the ground, she let her book fall on top of it and stared straight at the men. Her hands shook with rage, and she felt a sickness in the back of her throat as if she wanted to throw up, but she didn’t back down.

“Go on. What else have you got to throw at me? Or better yet, why not use me as a punching bag? I hear dickless assholes like to do that, so you must be all for punching a girl. How about it, Ian?”

“What the fuck?” Ian asked.

She had always taken their shit without causing any waves. Sure, they’d thrown her into her lockers, or shoved her over desks, or even tripped her.