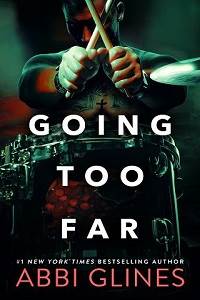 A life of drugs, sex, and rock 'n' roll was a demon that Dean Finlay accepted as his fate. His isn't a love story. It's a ride and things are about to get twisted...

Dean Finlay was ready for an easier life. He was tired of the fame and he was done with younger women. The older he got the younger they got. It was a fucking loop he was sick of being stuck in.

Brielle McGinnis had been kicked out of her foster home the day she turned eighteen. The pregnancy she'd been trying to hide had taken what little youth, she had managed to hold onto, away. Bri had grown up overnight.

Life had made her tough and she'd learned to survive. Now, at twenty- eight years old, she had a good job with insurance working in admissions at the local junior college.

When rock legend Dean Finlay came walking into the college office she had wanted an autograph for her son but his arrogance changed her mind. Just like every other man, he was a disappointment.

A blunt was required when having to endure lunch with the president of the junior college I had attended for one semester back before Slacker Demon, the rock band in which I was the drummer, was formed. The best marijuana money could buy should make this bearable.

When my CPA had told me I needed another tax write-off, I had chosen to donate to my only college alma mater. They were always asking for donations. I figured they needed it. Besides, if I was going to move back to the Florida Panhandle, then I needed to invest in the area.

I hadn’t expected to be invited to lunch and asked if I would speak at next year’s commencement. Why the fuck they wanted a guy who didn’t have a degree speaking, I did not know.

What the hell would I say to the kids anyway? Good luck with those degrees. Do some drugs, but not too much. Rock on.

I inhaled the last bit of relief before pulling off my sunglasses and heading inside the main office on campus. The air-conditioning didn’t seem to be pumping hard enough to cool the building down. Must not be in the budget to keep the office staff comfortable during the summer months. Hopefully, lunch wasn’t going to be here. If I had to endure an ass-kissing by a middle-aged man, then I’d prefer to at least be comfortable.

Pushing the door open that was labeled Office, I stepped inside, and a breeze hit my face. I sighed in relief, turning to see three box fans going full force. They weren’t making things cool precisely, but slightly more bearable.

“When I text you, I expect you to respond, Cam.” A frustrated female voice caught my attention.

I turned to see the back of a woman with thick brown hair piled on top of her head in a messy bun with a pencil through it. She had a hand on her hip, and the blue sundress she was wearing clung to her curves. Probably from sweat. Although all three fans were pointed in her direction, they weren’t enough against this Florida heat.

“That’s not an excuse,” she snapped at the poor guy on the phone. “I don’t care,” she told him. Then, she sighed heavily. “Okay. I love you. Call me as soon as you get there.”

I winced. The dude was being kept under her thumb. I fought back the urge to yell, Run, man! Run like the wind! There isn’t a pussy worth that controlling behavior!

I glanced around to see if anyone else could direct me to the president’s office, but we were alone. I would have to wait for her to finish smothering the guy she was talking to. Then, it occurred to me that perhaps I could save him from this phone call. I needed directions, and Cam needed off the phone with that one.

I cleared my throat loudly.

“I have to go,” she said then spun around, and her eyes locked on mine. I saw them widen slightly as she put her phone down on the desk in front of her.

“Hello, Mr. Finlay. I’m sorry about that. I didn’t hear you come in. I hope I haven’t kept you waiting too long.”

There were two things I realized in that moment. The first, she was sexy in that naughty librarian sort of way. Her eyes were so big and bright blue that you had to stare at them a moment before moving on. Her lips were full and painted a pale pink, and she had a rack on her that was hard to ignore. The second, I understood poor Cam a little better. He was probably around her age, and she was young—my guess would be mid-twenties. For a guy that age, hot pussy was a powerful force in his life. Perhaps it always would be. The life I had led numbed me to the power women yielded. I knew the deception that they could mask so well. My son’s mother had been a lesson I didn’t need to learn twice.