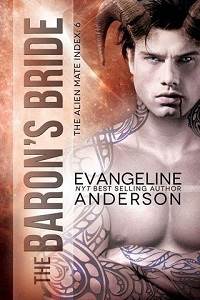 I never wanted to sell my blood for money. But that’s what I end up doing after an alien merchant abducts me and dumps me on O’nagga Nine. When I run into Baron Vik’tor and he takes a liking to me, it seems like my luck has turned. But the Baron is a powerful man and there are people in his life that want me dead. Will I survive being The Baron’s Bride?

Natalie Hale hates her life. You would too if an alien merchant abducted you and then dumped you on a distant planet where it’s so cold even the buildings and infrastructure are made of ice. To survive, Natalie has to sell her blood, which is the only commodity she has. Because the inhabitants of O’nagga Nine, where she’s living, need blood to survive, she manages to make a meager living. But she’s barely scraping by until she literally runs into the Baron.

Baron Vik’tor is the richest, most influential man on the planet. He’s also a half-breed—a Naggian/Braxian mix which means he has curling horns, blue tattoos, and a wicked temper whenever he thinks the woman he cares for is threatened. And it just so happens, he cares for Natalie.

But Natalie’s personal Pretty Woman scenario can’t last long. The Baron is a powerful man and there are people in his life that don’t like her having influence on him. Some will even stop at nothing to kill her. Can Natalie survive being The Baron’s Bride? You’ll have to read to find out.

Author's Note--This is book 6 in the Alien Mate Index series but it can be read as a stand alone book, though you might enjoy it more if you read books 1-5 first.

It was a question I was unfortunately used to hearing and the prospective buyer wasn’t looking to purchase any kind of merchandise I had for sale—he was asking the price of my blood.

Now, don’t get the wrong idea. I don’t sell my body, only my blood. And I only sell it from my wrist—not from my neck and especially not from my thigh. It might be a minor distinction to some, but it’s damn important to me.

Because I don’t sell my body, only my blood.

But it doesn’t matter how I try to justify it, it’s still a miserable existence. I’m trapped on the frozen ball of ice thousands of light years from Earth called O’nagga Nine, which is inhabited by a species of vampire-like people who drink blood to stay alive. I guess I should be grateful they do—otherwise I’d be selling my ass instead of the red stuff that runs in my veins.

I got dumped here by the guy who bought me from the Alien Mate Index. The AMI is a service run by these three-foot tall blue worms called Commercians. They abduct human women and sell them to well-heeled aliens who want an exotic bride. It’s kind of like a sci-fi twist on a mail order bride service except the prospective bride has no idea she’s up for sale until it’s too late—which is exactly what happened to me.

One minute I was in my cousin Rylee’s apartment, searching for clues as to where she went—she had disappeared without a trace a week before—and the next minute I was being sucked through her bathroom mirror and found myself stark-naked on a cold metal floor with blue alien worms standing around me.

There was another person standing over me—if person was the right word—he was also clearly alien. He had glowing yellow eyes, enormous ears like a bat, and a beak instead of a mouth. He also had scaly yellow skin which I could plainly see since both his hands and feet were visible, poking out from the tent-like red robe he wore. The feet were the worst—they had long, sharp, curving toenails that clicked on the metal floor when he shifted from side to side. Ugh!

“Hmm—I like the skin tones. Creamy brown, the same color as lilla-flower taffy. And her facial configuration is most pleasing—her eyes are lovely, though they do not glow. Her curves are also most luscious,” he remarked, sounding like he was ticking off a shopping list of qualities he had been looking for in a woman.

“Ah yes—she is a fine specimen of a Pure One female, my Lord,” piped up one of the worms in a high, Disney-character voice.

“But you’re certain she’s a La-ti-zal?” the alien guy demanded, looking at the worms, who all had about a hundred arms apiece. Maybe they were more like alien centipedes—I don’t know, I was too traumatized to really work it out.

“Oh yes—our instruments indicate this human female is definitely a La-ti-zal—one of those rare females who has been gifted by the Ancient Ones,” the one who had spoken before assured him. “She will certainly serve you well, My Lord.”