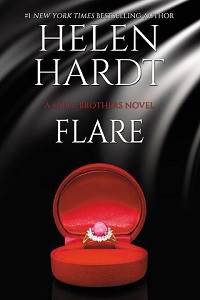 The Steel family won’t go down on his watch…

Rory Pike never imagined she’d fall for a Steel, but she has—Brock Steel, a renowned womanizer, no less. While passion flares between them, Rory knows they’re on different pages in life. She’s older and ready to settle down. Brock? Not so much.

Brock is enamored with Rory, but he’s content to simply live in the moment, especially with everything that’s currently going down in his personal life. Brock’s discovery that his father has kept important information from him—information that could lead to the downfall of his famous family—leads him to question everything he’s known since he was a child.

Rory has her own problems as well, and when they converge with Brock’s in the form of one person, the mysteries surrounding the Steel family deepen. Rory and Brock are determined to find the truth…no matter what the cost.

I study my father’s profile as I sit on the passenger seat of his pickup. The two of us are driving across the Wyoming border. Donny and Dale were both unavailable, so it’s just Dad and me.

I wish my cousins were here for backup. I love my father—I do—but I feel like I don’t know him anymore.

He’s quiet. When my father’s quiet, I begin to worry. It means his mind is working. He’s thinking. He’s thinking about things that I probably don’t even know about. Sure, he came clean about some of the stuff, but it’s clear.

“Tell me. Tell me who tried to kill Mom. And why.”

He doesn’t answer at first. Instead, he stares at the road in front of us. Driving to Wyoming is driving through a lot of nothing.

Finally, “Your mother had a patient. Her name was Gina. She was Aunt Ruby’s cousin.”

I widen my eyes.

“Your cousin Gina was named after her. Anyway, she was a patient of your mother’s, and she committed suicide.”

“Except she didn’t actually commit suicide. That’s what we were told, at first. But the person who took her wanted your mother to believe it, so he kidnapped her and left her to die in a garage, tied up, while a car was running.”

I feel sick. My stomach’s about to come out of my mouth. How did she escape? I want to ask, but the words don’t come.

“You know how smart your mother is. She managed to get her wrists untied, got into the car, and backed it through the garage door. She was treated for carbon monoxide poisoning.”

Still, I say nothing. My beautiful mother. My brilliant mother. All this happened before I was born.

“Funny,” Dad says. “I haven’t thought about this in so long. But that’s how your brother came to be.”

“Your mother was kept for several days, and she didn’t have her birth control pills with her. So she missed a few days, and when she escaped, and she and I got back together, she got pregnant.”

Before they were married.

With this new knowledge, I feel a kinship with my father I never felt before. A different kind of kinship.

“So I guess you could say that if none of that had happened, we wouldn’t have your brother.”

Talk about a silver lining. “Look, I get that you love Brad. I do too. But for God’s sake, someone tried to kill my mother.”

I pause for a moment. My father’s philosophy is not a bad one. Will I look back on what I’m going through someday and see only the good that came out of it?

So far, I’m not sure any good has come out of it.

The more we uncover, the more horror we seem to find.

“What you need to remember,” Dad says, “is that your mother lived through it. She saved herself. Part of it was luck, of course, but part of it was her own intelligence and shrewdness. She’s a clever woman. And I thank God every day that I have her and the two of you boys.”

“How can you make such a promise?”

Then my father does something completely unexpected.

I turn to look at him, regard his profile once more.

“What the hell is so funny?”