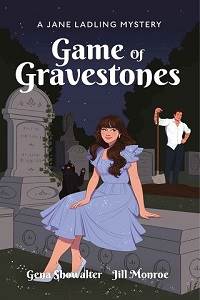 She suspects everyone of everything. Except her oldest friend. Who's found next to a body. Holding the murder weapon.

For the first time, things are just right for cemetery owner Jane Ladling. Her cat only kind of hates her sort of boyfriend, Special Agent Conrad Ryan, and she isn't flat broke. When she's asked to host a murder mystery fundraiser for the people of Aurelian Hills, Georgia, she'd totally on board. Champagne, intrigue, and community. Yes, please. Then game night happens and a fake murder turns into a red one, leaving her mentor and knitting buddy Fiona at the top of the suspect list, with heir best pal Beau a close second. Oops?

Jane's not about to leave the fate of her loves one to, well, fate. On the hunt for clues, she turns the small town upside down. As scandalous secrets surface, a single truth becomes clear: if she doesn't solve the murder fast, Jane will be the next victim.

“Never say you’ll cross any line to win. Not out loud.”

Jane Ladling lived by three rules. Well, two rules and a strong suggestion. Or semi-strong, bordering on incredibly soft. 1. Never fall in love. 2. Always be good to pets, family, and friends. And 3. Absolutely, under no circumstances, break rule number one.

Currently, she stood on a makeshift stage, shoulder to shoulder with her best friend and confidant, Fiona Lawrence, smiling and waving at party guests. Jane kept those rules front and center as her gaze continued to stray to a certain Georgia Bureau of Homicide Special Agent. No more than twenty feet away, he engaged in deep conversation with a rapt circle of townspeople eager to learn more about a recent case. The Woeful Widow and Mr. Art Amour. Solved by Jane herself, thank you very much.

The romantic setting didn’t help her endeavor. Soft music played in the background of a large, transparent tent with plastic walls. A structure that dominated the entrance to her landlocked cemetery, Garden of Memories. Moonlight and stars glowed overhead while a hint of magnolia and jasmine scented the air, soon to fade until the return of spring. Along the outside perimeter, trees swayed with a gentle fall breeze. Within, lanterns flickered with hazy light, illuminating gold and black balloon arches and twirling streamers. White pumpkins and glittery pinecones added a taste of autumn.

The roaring twenties themed soiree was in full swing.

“Mmm mmm mmm.” Fiona gave Jane a gentle nudge. “I see you’re as riveted to that boy’s hot buttered buns as I am.”

“Oh my gosh.” Caught staring! “We shouldn’t discuss his, um, derriere.” Jane’s cheeks flushed as she slid her gaze over Conrad Ryan for the thousandth time that evening. He wore a white button-down with dark slacks and a matching jacket, perfectly fitted to his lean, muscular frame. “But you aren’t wrong. Those buns are sizzling, aren’t they?”

Fiona fanned her cheeks. “I can feel the burn from here.”

Once, the sixty-two-year-old had been like a sister to Jane’s Grandma Lily. When the darling woman passed, Fiona became Jane’s rock. Despite their thirty-six-year age difference, they were like sisters, too.

“He should wear a sign,” Jane said. “Handle with care.”

As if he sensed the scrutiny, Conrad cast a glance over one broad shoulder. Thank goodness she looked up in time to catch his eye. He winked before refacing his audience.

But that was all it took. Jane’s breath caught and her heart thudded. Dang, he was beautiful. Tall and strong, with thick black hair, and whiskey-colored irises. A straight nose and firm jaw added to his incomparable appeal. The Rolex on his wrist hid the tattoos that peaked from the sleeves of his jacket.

The day they’d met, the Atlanta native had come to her hometown, and all but accused her of murdering a doctor. Since then, he’d wreaked complete havoc on Aurelian Hills—and her life! Perhaps not as much havoc as she’d wreaked upon his, but that was neither here nor there. Now they were kinda, sorta, well, dating. If you could date someone without going on actual dates with them. Which sounded weird. But hey, welcome to Jane’s world.

When you owned and operated an ancestral cemetery, weird became the norm. Besides, she and Conrad had enjoyed something a million times better than romantic dinners or trips to the theater. They solved murders together! Two so far.

Although, granted, Jane had done the bulk of the solving. Not that she was bragging or anything. Truth was truth. Conrad’s problem? He relied on clues and logic. Meanwhile, Jane utilized a far superior method. Conjecture. Everybody kept secrets. Suspect the worst from the beginning and work from there. Sure, she had no friends outside her inner circle, but who needed more of those when you had such an amazing assortment of confidants?

She ignored the sudden spike of longing that constricted her chest.