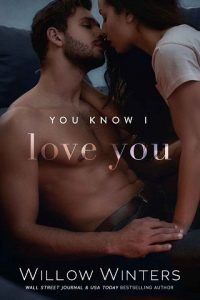 It only took one night; one moment, and my fate was sealed. He knew I would never tell him no.

I wonder what would have happened if I’d never met Evan. The thought makes my stomach sink and twist, and a cold chill flows in waves over my body.

It pains me to consider such a thing. To have never been with the man I love.

Dragging in a lungful of cold air, I steady myself with deep breaths.

It physically hurts to imagine not having him in my life for the last six years.

I didn’t know I was setting myself up for heartbreak all those years ago. Yet here I am, and that reality is what keeps me up at night. My eyes burn from both exhaustion and the tears begging to be shed.

That chance encounter set everything into motion, and only months ago I would have said it was a blessing, bestowed upon me by fate, or maybe kismet. But now I know better.

I wish I’d never met Evan at that gas station.

This pain isn’t worth it.

If only I could go back, because I don’t know how we’ll get through this.

Tell me a lie and make it sweet,

Like the vows you made on our wedding day.

Tell me a lie, don’t make it hurt,

The pain in my chest won’t go away.

Don’t tell me the truth, I can’t face what’s to come.

Don’t tell me the truth, I don’t want to hear.

The chill on my skin lingers and flows down my shoulders. It’s an odd sensation that travels across my arms and I’d like to blame it on the alcohol, but I’ve felt it all day. From the very start of this morning, before the drinks came easier and easier. For days, really, I’ve been feeling this strange sensation of not quite being in my own body. As if I’m not really here. This isn’t really happening to me.

It’s been going on for more than a few days if I’m honest … maybe even weeks, but I’ve been ignoring the signs and whispers, pretending like they weren’t real.

Now that this sickness won’t leave me, I can’t deny it.

Ever since I let the words slip through my lips.

I want a divorce.

An ache in my chest prompts me to take a sip of wine. Letting it slide down my throat, I pretend that it soothes me. It’s numbing, that’s what it is. That’s what I need. Tears prick at my eyes, but I don’t let them fall. Instead a shuddering breath leaves me and I lift up my glass, downing the remaining wine. It’s too sweet for being so dark.

Startled by a sound from the floor above me, the glass nearly tips over as I set it down quickly to wipe under my eyes. I don’t want him to see me cry; I won’t let him. But the creak I heard was a false alarm. I don’t hear the heavy footsteps of him coming down the stairs to our townhouse. I’m still alone in the dining room, waiting for him to leave.

Left only with bittersweet memories and the constant question: How did this happen?

The thick, dark drapes behind me are pulled shut but even they can’t completely drown out the night sounds of busy New York City. There’s always a bit that travels through. It used to bother me when I initially moved here, but now it’s soothing. It calms me as my gaze drifts toward the empty stairwell, where it lingers.

I shouldn’t be drunk, not when I’m supposed to be preparing to meet with a potential client tomorrow. As one of the top literary agents in New York City, I’m damn good at what I do but tonight, I don’t care.

I shouldn’t have closed my laptop and logged off all social media when I have promotions and advertisements running around the clock for these launches.

I shouldn’t be doing a lot of things.

But here I am, sitting at the head of the dining room table, and I refuse to do anything but watch the stairs and wait for him to leave. The very thought of staring at his back as the front door closes forces me to reach for the bottle.

I listen carefully as I pour the last of the wine into my glass. He’s packing at the last minute, like he always does, but this time it’s so much different. He’s traveling for work, but when he leaves from his rendezvous in London, he’s not coming back here. That sudden realization brings a fresh flood of unshed tears to burn my eyes, but I remain very still. As if maybe playing dead will hold back these emotions.