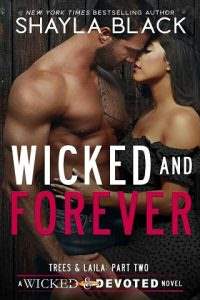 For Laila Torres, the day started out troubling. It ended in hell.

As dawn rose, her bodyguard and lover, Forest “Trees” Scott, prepared to join the rest of EM Security on a mission with one objective: to rescue his bosses’ sister, who was being held captive by dangerous kingpin Geraldo Montilla. As he headed for the door, Trees lifted her against his tall, hard-muscled body and held her close. Reflexively, she wrapped her arms around his neck, her heart beating fast.

Last night, they had fought. Trees’s bosses had proposed she act as bait to lure the narcotics king out of hiding and into a trap. She’d said yes. After all, her sister and her nephew—the only family she had—would never be safe until Montilla was gone. When Trees had refused to let her go, she’d tried to escape. He’d quickly caught her and dragged her back to his house. Then they had skipped sleep and spent the rest of the night electronically hunting their enemy. With the information he’d gleaned, Trees had devised a plan for him and his fellow operatives to nab the kingpin, one that didn’t require her to be involved in Montilla’s takedown at all.

Now, as he left to put himself in danger so she would be safe, she felt the desperation in his touch. It matched her own as she clung to him. “What are you doing?”

“Telling you I love you, Laila.”

She froze. That shouldn’t be possible. Yet…how many things had he done to help her, soothe her, and save her? Trees had always been fair and patient, kind yet gruff, but intensely protective. Would he have tried so hard if she didn’t mean something to him?

Laila wasn’t sure and didn’t know what to say…but her first reaction was resounding joy. Her heart filled with it and threatened to overflow.

But could she give the words back to him? Had she searched her soul enough to be certain of her feelings?

“I know it’s one-sided. I don’t expect you to say anything. I just—” He shook his head, let out a curse, then seized her lips in a hard press as if he was determined to imprint himself on her. And he stole her breath.

Just as suddenly, he wrenched away, set her on her feet, and slammed out the door, leaving her gaping and already regretting the things she’d left unsaid.

With a final glance back at her through the living room window, he punched a few buttons on his phone. She heard the house alarms engage—his way of keeping her safe during the twelve hours he would be gone.

After he drove off, Laila roamed his place listlessly. She picked at breakfast. She turned on a telenovela…then turned the silly thing off. She paced, praying Trees would finish this mission unscathed. She showered, hoping the soothing water would help her decide what to say when he returned.

What was love? Did she really know? She felt something for him—a lot, actually. But love?

If that isn’t what you feel, why do you have such angst?

It was a fair question. Was she capable of the kind of love Trees had given her? Or had she endured too much to love him the way he deserved? After all, if she allowed another person to be tattooed onto her heart, that gave her tormentor, Victor Ramos, another weapon to use against her, the way he had her family.

After wriggling into her pink tank and short shorts—and wishing for the hundredth time that she’d packed something warmer when she’d fled Florida—she towel-dried her curls, her thoughts turning.

Until an electronic peal shattered the silence.

She froze. Her heart started chugging. Was someone on the property? In the house?

Days ago, she’d told Trees safety was an illusion. Unfortunately, she’d been right.

Laila tossed her damp towel into the sink, then rushed down the hall to Trees’s home office to scan his bank of security cameras. Her heart stuttered when she saw a sleek black truck with unreadable plates lunging up the road. That wasn’t Trees. It wasn’t his friend Zy. It wasn’t one of their three bosses, either. She didn’t know for sure who was barreling onto Trees’s property uninvited, but he wasn’t coming to borrow a cup of sugar or say hello.

Had she been discovered again? By the Tierra Caliente cartel or by Victor Ramos himself?

Either possibility sent panic burning through her. From her bedroom, she heard the ringing of her phone. Trees. He would already know that someone had broken past his security. Did she dare run back to grab the device?

She peeked out the living room window, to the front of the house. The black truck was rolling to a stop in front. She didn’t have time to retrieve her phone.

The ringing stopped, only to start again. Trees was panicked. She could practically feel him worrying as he pressed buttons, looked at his cameras, remotely tried to assess the situation and figure out how to save her when he was probably hundreds of miles away. She hated to worry him, but she had to shove regret aside for survival.