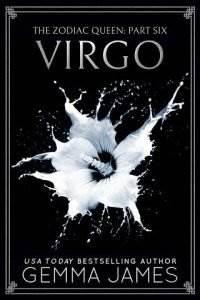 If I still believed in miracles and happy endings, I’d wish to rewind the month and go back to that day in the gazebo, when Sebastian surprised me with a different side of himself—a side he hadn’t revealed until the moment I became his.

Just minutes ago, Lilith dropped her news on our happiness from out of nowhere, stealing our final moments together with a single utterance of truth. And the truth burns like napalm—like a horrendous dousing of acid that clings to my skin. Her confession, along with Sebastian’s lack of a denial in the face of it, haunts me after the door closes on her retreating back.

Neither of us move at first, our inaction allowing disquiet to reach a momentous crescendo. That’s when he looks at me, his face awash with apology.

“Don’t,” I say, blocking his attempt to touch me. I bolt into the sitting room, but suddenly, the House of Leo feels cramped and suffocating—all six-thousand square feet of it. This place is no longer my sanctuary. Sebastian’s home has turned into the domain of laden hearts and singed dreams, and yet…

I don’t want to be anywhere else.

He follows me and drops into a chair, and as his hands come up to hide his face, he’s the portrait of guilt. Those same muscular shoulders I held onto in the shower this morning now slump in a way that spears me to the heart with betrayal.

Dread simmers in my gut—a cauldron of despair threatening to boil over. My throat aches with unshed tears as I wander to the wall of windows and gaze at the dreary sky snuffing out the sea. Anything to stave off the incoming deluge.

Because I won’t cry. After everything I’ve been through within these circular walls, this will not destroy me.

With a sigh, he rubs both palms down his face. “Of course I was going to tell you.”

“Yes!” As his harsh voice echoes, he tries to hide a wince.

“Right before I saw you in Castle’s arms.” The implied accusation detonates in the space between us, and he stands, shirtless, his dark blond hair a mess from my fingers all morning. There’s nowhere for me to go when he comes for me, eyes narrowed and brows slashing downward over an icy blue gaze. His audacity to wield anger in this situation shouldn’t surprise me, and it shouldn’t put me on the defensive.

I hold my ground and meet the challenge in his gaze. “Well now I know, so what does she want from you?” My tone asks something else.

What does this mean for us?

Planting both hands on the glass behind me, he presses forward until my spine touches the chilly window. “She doesn’t want a ring and a white picket fence, if that’s what you’re asking.” He’s invading my space, derailing my runaway thoughts until a voice in the back of my mind points out that he’s crowding me on purpose.

To distract from the issue at hand? Or to deflect? I can’t be sure, since he’s good at both.

His eyes are molten ice, lowering to my lips a mere second before darting up again. We’re two stubborn pillars trading prideful stares. My mouth slackens as his lips part, and we share quick and shallow breaths—angry breaths with an undertow of desire.

The ever-present heat between us will never cool. Anger fuels it. Lust fuels it. The sun rising in the east and setting in the west fuels it. Our chemistry is an inevitability, a foregone conclusion before the first sentence of our story was ever written.

“It doesn’t matter what she wants,” he answers, breaking the tense standoff with a flick of his tongue along his bottom lip. “It won’t change a damn thing between you and me.”

Truer words have never been spoken, and yet there’s a contradictory strain in his voice.

I gear up to argue, but my vocal cords fail me, and that’s when he goes on the offensive, his lips silencing the mounting protest on my own. Before he slips his tongue past my defenses, I shove him back.

“You can’t just kiss this away.”

“I know,” he says softly, his anger losing strength. He sinks into a chair again like a hopeless brick on a journey to the bottom of the ocean.

“Why didn’t you tell me?” Swallowing a piece of my pride, I settle into the seat across from him.

“I already told you—”

“I know what you said,” I interrupt. “Elise and Landon’s wedding was over a week ago. You’ve known all this time.” I pause, allowing a laborious beat to pass. “And time isn’t on our side.”