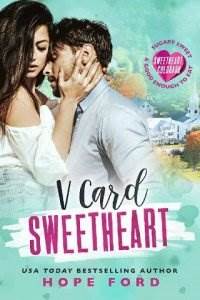 Staring at me, watching my every move like he’s waiting for me to break out in song or dance. He has no idea what his gaze is doing to me. I’ve already almost dropped two trays of food since he got here just an hour ago.

His name is Dutton. Dutton Cole. He owns his own company, Dutton Trucking, but from what I can tell, he drives a truck as well. He came through Sweetheart, Colorado around six months ago. I can still remember the first time I saw him. He had to be the biggest, gruffest man I’d ever met. He has tattoos down one arm, and every time I see them it makes me wonder where else he has tattoos. His hair is a dark brown and a little shaggy on top, but short on the sides and back. And his eyes. Goodnight, his eyes. They’re a dark blue and I swear when he looks at you it’s like he’s looking into your soul. He’s like no one I’ve ever met before. Which is saying something considering where I work. Being a waitress at The Stop, a truck stop diner, I see a little bit of everything in here. I figured he was just passing through and I probably would never see him again. But now, it’s like he’s in here all the time.

The first few times he didn’t say anything to me, he would just sit and look at me, watching me work.

Even though he never said much, I would see him talking to Alice, the manager of The Stop. She’s been here ever since I started working here back in high school. But she has a way of making anyone talk. She’s quicker to be up in a person’s business than the town gossip.

The third time he came in, he talked to me. His voice was deep and thick, and I was so stunned by the sound of it, I swear I remember sliding my thighs together to feel the friction there. Alice had asked me to take over his table, and even though I was unsure about it, she assured me it would be fine.

I carried the plate of apple pie and set it down in front of him. “Can I get you anything else?”

He stared up at me, and I swear I started thinking of all the things I wished he would ask me for. A date. Join him for dinner. Or go home with him. If he had said any of those things, I would have immediately said yes. I’m drawn to him. I don’t know why or how to exactly explain it, but there’s something about him.

He pointed his fork at the pie. “You make this?”

It was then I rubbed my thighs together. His voice made me think of sex. Dirty, sweaty, take what I want sex. Which just my brain going there is a huge feat. I swear I’m the last twenty-two-year-old virgin in Sweetheart.

He took a bite, and I watched as his lips wrapped around the fork. I was holding the tray in front of me as if I was hiding behind it. Could he smell my desire? Were my hard nipples pressing against my shirt? All these thoughts went through my head and my knuckles turned white on the wooden tray when he moaned.

I bit my lip so I didn’t moan with him. Oh my God, I have to get out of here. Get some fresh air. Heck, maybe go out back and smoke a cigarette even though I don’t smoke.

“This is the best I ever had.”

His eyes found mine again, and I smiled at him. I could feel my face heat the longer he looked at me. “Thank you.”

Ever since that day, when he comes in, he sits in my section. I’ve gotten to know him a little. I know he’s thirty-two, and even though he has always loved driving a truck across country, lately he’s thought about settling down.

He eats a slice of pie, sometimes two, every time he comes in and always praises my baking skills.

He watches me nonstop, and I swear when he’s in there, it’s like he controls the mood in the restaurant. I’m used to being hit on, even though I’m as plain as can be. But when he’s here, I swear I’ve caught him dirty looking the other truckers. They seem to take his silent threats to heart, because they tell me “yes ma’am” and “please” as I work. And each time they do, I look at Dutton, and he gives a little nod, like he approves.

I always think he’s going to ask me out. I mean, I know I’m not much to look at. I’m overweight, with mousy brown hair that’s always in a ponytail. I hardly ever wear makeup, and I’ve learned since working at The Stop that I wear my clothes a size too big to hide my large chest. I never was one to enjoy attention, but from Dutton, I think I would like it. But I’m not holding my breath. It’s been months now since he started coming in, and even though it’s obvious he likes me in a friendly way, he’s not going to ask me out. I refuse to get my hopes up.