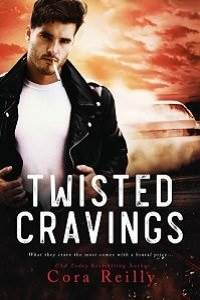 Twisted Cravings deals with many sensitive topics such as drug abuse, child abuse, violence and torture, so please be aware of that.

Blood coated her lips, a streak of color against her pale skin. Even the flaming red of her hair paled in comparison.

She lay motionless on the cold stone floor, her wide eyes directed at the ceiling but unseeing of what lay before her.

I dropped the knife. It landed with a clatter, blood splattering around it. For a second a sliver of my face reflected in the only clean spot on the sharp blade. For the first time in my life, I understood the fear people harbored when they heard my name.

Today my expression justified their terror.

Bloodshed was in my genes. All of my life, I’d fought this craving deep in my veins, had dimmed it with drugs and alcohol, but its call had always been present, an undercurrent in my body that threatened to pull me under.

I hadn’t let it. Instead I’d thrown myself headfirst into its depth, had followed the current to the darkest part of my soul. For so long, this day had been my greatest nightmare, a fear beyond measure. But fuck, today felt like a rebirth, like a homecoming to my true self.

My palms were sticky with her blood and it felt perfect.

No street race could ever compete with the thrill, the absolute high of a kill, and even less with the power rush of torture.

Denying one’s nature was living a lie. Only drugs in all shapes and forms had made it possible in the past. No more.

People finally had a reason for the nickname they gave my brothers and me.

The monsters of Las Vegas.

My monstrous side had come out to play but the revelry had only just begun.

The sun burned down on the dry earth, making the air flicker, distorting the shapes of almost two dozen race cars lined up at the abandoned road stop. It was only the end of April but not far from Death Valley, the temperatures already reached unbearable heights in the afternoon. I killed the engine of my yellow BMW M4 and got out. Sweat almost instantly broke out on my skin, making my white tee stick to my skin. I was familiar with heatwaves, having grown up in Las Vegas, but the unmoving air in this part of the country still often made me breathless. The heat wreaked havoc on the race cars and drivers all the same, which was why we chose the area for our qualifications.

Many familiar faces nodded at me through the windows of their cars, staying in the cool shelter the indoors provided. Some of them never got farther than the qualifications, but others displayed serious talent. My steps faltered briefly, my gaze magically drawn to a streak of flaming red. For a moment I was sure this was a fata morgana. Slowly, more and more of the red streak of color took shape. A long mane of red hair framing a pale face. Her red lips, the color of dried blood, curved into a smile around the cigarette dangling from her mouth. The smile wasn’t flirty or particularly friendly. Challenge lay in her eyes. It was too soon for pit girls and groupies—they mostly stuck to the final races or swarmed around the winners of the qualification races after the finish line—and even if it weren’t, I’d have known she wasn’t one of those girls. The way she perched on the hood of a neon-green Toyota Supra told me it was her car and she’d be racing today. Women rarely made the cut into the finals. My brother Remo thought they lacked ruthlessness and ambition, but they were probably only more sensible than us men. With this girl, I had a feeling she might surprise us.

I dragged my eyes away from the redhead and moved toward the gas station.

A generator spluttered beside the run-down shop, powering a small AC unit inside the decrepit building. I entered our makeshift headquarter, where Crank was already going over the registration sheets piling up on the desk. The heat was marginally more bearable inside but the small AC unit didn’t stand a chance against the almost hundred degrees blasting down on us. The broken gas station window certainly wasn’t helping either.