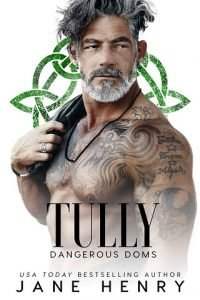 I toss down a fourth pint and slam the mug on the counter. Rafferty quirks a brow at me, takes the empty stein, and wipes the counter down.

“Need another, mate?” he asks. The Craic’s bartender knows us well.

Lachlan chuckles beside me. “Bring the bloody keg here with a straw, will you?”

I aim a punch at his arm, but he easily dodges. “I’ll shove the straw up yer arse.”

“Aim’s off when you’re toasted, brother,” he says, jumping down from the chair and bouncing on the balls of his feet to demonstrate how limber he is. He’s high on life, having just passed around Cubans to celebrate the birth of his firstborn child, a son.

Tiernan snorts beside me. He’s grinning, a proud uncle. “Come off it, Lach,” he says. “Tully toasted after four pints? You underestimate him.”

He’s right. Half a dozen pints will warm me up, more like.

“Then why so broody?” Lachlan asks.

“Broody’s my middle name,” I say with a shrug. Unlike the younger men of the Clan, I like to take my time with things, whether that be a pint, a fucking cigar, or a woman.

“She’s late,” Tiernan says under his breath. “Supposed to be here an hour ago, no?”

I ignore him, just glance at my phone.

I told her to meet me at the Craic, to be on time, and told her there’d be consequences if she was late this time.

A part of me thrills at this, knowing she’s pushing me to see how far she can go. I’m up for the fucking challenge with McKenna.

My eyes rove around the small interior where the locals meet for a pint, the anteroom before the real fun begins, when I see her. So small, all dressed in black, one would hardly notice her among the throng of dancers on the dance floor. But I’d recognize her a mile away, even without her slight limp and vivid, haunting eyes.

McKenna Sweeney, the most lovely woman I’ve ever seen.

The rest of the sounds in the room are drowned out of awareness as I make my way over to her, snagging the leftover Cubans from Lachlan on my way and tucking the box under my arm. He chuckles and salutes me. My blood pounds in my veins as I get closer to her.

She broke a rule.

She disobeyed an instruction.

And that’s exactly what she wants.

The men at the back step aside to let me into the private, members-only section of the Club, beyond the crush of dancers and loud music, beyond the bar, to the privacy of the more intimate meeting place of the club.

“Tully.” One guard nods his head, letting me past, and the members part as I walk in. I’m aware of their eyes on me, the whispers and nudges, the way even the largest, most formidable men step aside to let me through. The men of the Clan are well-respected in Ballyhock, and well-known in the Craic. We’re given respect and wide berth. I’ll need it tonight.

McKenna stalks forward, heading to the private rooms. She’s wearing a black, knee-length dress that’s damn near painted on, and a black masquerade mask with purple feathers. My belly warms at the sight, a deep thrum of need pulsing low in my abdomen.

I’ve never seen her dressed like this. She favors simple clothing and flats, and often dresses her part of a schoolteacher. No one knows how gorgeous she is, how fucking exquisite. No one knows the little mousy schoolteacher’s feisty as hell and kinky as fuck.

No one but me.

And tonight’s a special occasion. We’re getting back together.

She’s as nervous as a little rabbit as she scurries away. She quickens her pace.

My voice booms over the noise of the crowd and speakers.

She freezes, turns, and looks over her shoulder at me.

God, that voice, so soft and sweet. You wouldn’t know the temper the lass has by those doe eyes she’s giving me now.

I snap my fingers and point. “Room two.” I’ve booked it for the night and prepared it.

She swallows hard. Her eyes narrow, fire lit behind them. She purses her lips and crosses her arms, her full breasts like little mountains. I want to bite them, to lick her nipples, to weigh them in my hand and work magic until she’s keening with pleasure and begging for release.

My chest tightens. “No?”

She blinks, as if she’s on the brink of losing her resolve. Her eyes dart to the left and right. We have a small audience.

“You’ll have to make me,” she says, that fire in her eyes stoking a fire of my own.

Christ, if she doesn’t know exactly how to play me.