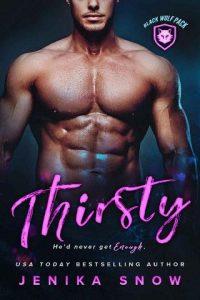 I narrowed my eyes and cut a withering glare at Felix. “Don’t know what you’re talking about.” I went back to measuring out the length of wood I was about to cut, but my gaze kept snapping back up to her.

“Bullshit,” Felix said with amusement in his voice. “If he sees you eye-fucking her, he’ll tackle you to the ground and make you submit.”

I growled but didn’t answer.

“You think the Alpha is gonna like you checking out his only daughter?”

I clenched my teeth and grappled with my control. No, the Alpha of our pack wouldn’t like me checking out his barely legal daughter, but then again, the Alpha also didn’t know she was my mate.

“Mia is a grown fucking female,” I snarled.

Felix chuckled but held his hands up in surrender. “No disrespect, Tucker. And I'm not trying to start a fight with you. But you know what I mean. She’s what? Nineteen? And just turned that? Just came of age and maturity. You’re old enough to be her father. Not to mention the Alpha will have your balls cut off before you can even get close enough to see if she’s interested in you.”

Yeah, Aiden probably would try to have my balls cut off if he knew the things I thought about where Mia was concerned. But even if Aidan was the Alpha, I was younger and stronger, and I had something helping me become more powerful that he didn’t.

And as much as I felt guilt for thinking that, since the only reason he didn’t have a mate was because she died giving birth to Mia, it was a fact that having your fated female by your side meant you were stronger than those who were alone.

It was just our nature.

I tried like hell to focus on my work, but knowing my mate was so close, the incessant drive to take her away and mate her—further making our fated connection permanent—rode me so hard my hands shook.

I forced myself to work on the slab of wood, measuring it out, getting the exact dimensions before I cut it. I tried thinking about the task at hand, how the pack was currently building a longhouse for our little shifter community.

The Black Wolf Pack had currently acquired another hundred acres of thickly forested land in the Black Hill Mountains of Colorado. Our pack may’ve been small compared to other shifter groups in the country, but we were known for our strength, were territorial as hell, and were content to live our lives hidden deep in the woods and away from prying eyes.

But because of that seclusion, it made finding our fated mates all the harder. When you’re only surrounded by your own people, the chances of finding your female was cut down drastically. I knew some males in the pack had never found their mates, and because they couldn’t have offspring with anyone other than their fated females, they now lived isolated and lonely lives. I could see that dark loneliness in their gazes while they lived as if they weren’t missing the most integral part of what made them up.

Although we could never produce children with anyone but our mates, I heard of some of the older males taking a companion, someone who they could still share their lives with in a purely platonic way. These companions had also never found their mates, so they were strictly friends. The best of friends who they could talk to, connect with on some level.

I hated that fucking idea.

I’d much rather wither and die alone than share my life with anyone who wasn’t my female.

And I’d come to the conclusion that my life would probably end up like that. I assumed I’d never find my female, not unless I traveled outside the pack. But being the Beta meant I stayed where the Alpha did, and Aidan was content in Black Wolf territory.

So this was where I stayed as well.

But then Mia came of age, and I felt our connection. And I'd never been happier that I stayed, because the reason I even existed was here.

I glanced across the center of the village at the cabin we used to discuss and plan new structures for the community. I couldn’t see Mia, but I knew she was in there with Aidan. I’d seen them head in there just a few minutes before, and since then, I’d been unable to focus. Who the fuck was I kidding? I hadn’t been able to focus from the moment I found out she was my mate, since I felt that electric pull, that awakening that she was mine.

“How many tables are we making again?” Felix asked, and I forced myself to look away.

“Six,” I said automatically. “This is the last one.” I hefted the large slab of wood and took it over to the saw. After it was cut, I handed it off to Felix. He’d engrave the wolf depictions of our kind and ancestors before handing it off to Sean and Stein, who’d smooth and gloss everything out. Then after that, it would be passed to Milo, who’d take it to the assembly line, where they’d make it the actual table in the longhouse.