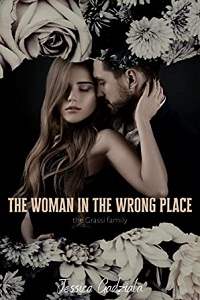 I swear I’d been saying that nonstop since I started working for him a few months before.

It was one of the first things his employees told me when I’d been hired. And it was very matter-of-fact.

Here’s the break room. This is where we store supplies. Oh, and the boss is a part of the New Jersey mafia.

It was one of the craziest things I’d ever heard.

I mean who expected to be told that their new boss of a banquet hall business was somehow a gun-toting, murderous lunatic?

I’d actually bought into it for a while, worrying myself sick that I’d somehow just gotten in over my head, that I was going to, I don’t know, be asked to hide or transport drugs or something like that.

But then I met Matteo Grassi.

And, well, it was absurd to think of him as some big-time mafioso.

I mean, I wasn’t even sure that the mafia was as big of a deal anymore as it had been in the past. Don’t get me wrong, I was sure it still existed. But it wasn’t like mafia crimes were making the news anymore. In fact, I hadn’t heard a whisper about the mob since I was a kid.

Aside from that, well, Matteo didn’t exactly come off like a member of the mafia either.

I wasn’t just saying that because he was ridiculously handsome. He was, mind you. He was tall and fit with perfect bone structure, hypnotic brown eyes, and this amazing inky black hair that he grew out toward his shoulders where it fell in these silky loose curls that I found myself wanting to know the feel of more than once.

But, yeah, being attractive didn’t mean you couldn’t be a bad guy.

I was also willing to admit that my opinions about how I thought the mob looked and acted had a lot to do with movies, TV, and old stories back in the 70s and 80s.

I saw mafiosos as these kind of short and stocky men who constantly talked about and smoked cigars and wore these expensive suits and chunky male jewelry.

Matteo didn’t fit that stereotype at all.

He dressed well, but not in suits. He had this sort of effortless, almost European style. He was constantly in well-fitting jeans, Henleys, sweaters, fancy leather boots, and even scarves and peacoat in the winter.

If you saw him on the street, you might think the man was on his way to do a photoshoot. That was how gorgeous and stylish he was.

Then, on top of that, there was none of the gruffness that you would expect from someone in the criminal lifestyle.

He was a nice man.

I mean it wasn’t like I interacted with him much. I was just a part of the design and planning team. I met with the clients, but had pretty much no reason to talk to Matteo himself. But when I’d overheard him speaking to other parts of the staff who worked more closely with him, he was always laid-back and kind, never raising his voice or making anyone feel unsafe.

So, yeah, it was a ridiculous idea.

The only reason it was even on my mind was because my friend had been teasing me about it over the phone while I picked out my outfit for the concert we were heading to later that night.

Really, I never should have mentioned it to anyone because everyone liked to sensationalize something small and silly like that.

Taking a deep breath, I moved in front of the mirror that was propped up against my bedroom wall that was bigger than I was. I’d needed to pay someone in my complex to move it into my apartment for me, it was so big and heavy. Was it way too expensive for what it was? Absolutely. But it was a little ostentatious purchase I’d made when I’d gotten hired at the banquet hall. I told myself it was because, for the first time in my life, I was going to need to dress nicely every day, and having a mirror to inspect my outfit with was imperative.

Complete nonsense, of course, but I wasn’t mad about it.

I was probably a little too dressed up for a concert. But I figured because it was indoor, I could get away with getting a little more fancy. It was also a little more risqué than I was used to dressing as well. But I’d seen it at the store and felt this strange urge to buy it. Besides, I was finally at the point where I was thinking about dating again now that I got my life and career on track, so I figured it didn’t hurt to dress to impress.

I had on black straight-leg slacks, sky-high heels, and a creamy silk long-sleeved top that had a slit between the breasts that went all the way down to where the shirt tucked into the waistband of my pants.