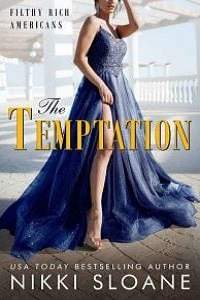 Tension was something I was so accustomed to in my life. I wore it effortlessly, the way my father wore a bespoke suit as a second skin, as he did now. He sat in the chair across from me in the formal living room, dressed in his standard three-piece black suit.

My gaze snagged on the colorful silk peeking out from his front breast pocket.

His girlfriend’s doing, for sure. Macalister Hale had obsessed over tradition his whole life and embodied a classic look. He much preferred people’s attention stay on him rather than his pocket square, but Sophia was pushing him to be fashion-forward. Or at least to join this century.

Any other time, I would have enjoyed the idea that a woman half his age had such power over him, but I was too distracted to focus on it. My father had shown up at the Hale estate and announced he had something important to discuss. He’d arrived without warning, likely because if I’d known he was coming, I’d have avoided him.

So, I’d reluctantly followed him into the front room of the house which had once been his and dropped down onto the couch my former stepmother had reupholstered the year before her death.

Of course, I immediately regretted my decision.

Alice loomed large between us, and the weight of unspoken words pressed down on my chest, making it difficult to breathe in my father’s presence. He already knew what I’d done, but it did nothing to ease my guilt.

“This will only take a minute,” he said.

His tone was full of his usual commanding indifference, the one that was so effective at telling you only his opinion mattered. His posture was rigid and straight, as if he were perched in a throne and not a chair, but again—this was normal. He was an imposing figure to the rest of the world. He made other people uncomfortable with a simple look.

But I saw through it today, and this was what had me so distracted.

Whatever he wanted to discuss, it gave him hesitation. In fact, the great and powerful Macalister Hale seemed . . .

My stomach churned with unease. My father didn’t do nervous. I swallowed thickly. Fuck, was he going to bring up Alice? Was this the conversation we desperately needed to have—the one I still wasn’t prepared for?

My father’s gaze shifted away from mine. “I’m planning to ask Sophia to be my wife.”

I blinked in my lack of surprise. My family had its fair share of secrets, but the way my father felt about Sophia? That wasn’t one of them. The entire town of Cape Hill knew, thanks to my father’s proclamation five months ago at Damon Lynch’s disastrous campaign dinner. The only thing surprising to me was that my father hadn’t proposed already. We Hale men were nothing if not decisive, and I was sure his mind was set. Once his decision had been made, what was the point in waiting?

And he’d raised me to understand Hales took what they wanted.

“All right.” I was unsure what I was supposed to do with this information. “You wanting me to wish you luck?”

“No, I don’t need luck.” His cold blue eyes snapped back to me. “I would, however, like your permission.”

I was suddenly grateful to be sitting because the floor threatened to swallow me whole. “What?”

He drew in a deep breath, making his shoulders lift. “She’s the same age as you, so it’s understandable if that gives you unease.” He had one arm draped over the armrest of his chair, his fingers tensed in a fist, and his thumb brushed back and forth over his knuckles. “I don’t need to tell you how much I care for her. You heard what I said that night, which wouldn’t have been possible without your help. I’ll always be grateful for that.”

My brain was still stuck on the part where he’d ask for my permission. It ranked right up there with him admitting defeat.

It was something he never, ever did.

“It was no big deal,” I said automatically.

He ignored my statement. “I’ve spoken to Royce already, but I’d like your approval as well.”

He hadn’t asked my opinion about marrying Alice, but then again, that had been fifteen years and a lifetime ago. Had he ever asked for permission in his life? Until recently, he had no need for anyone else’s approval.

God, he’d changed so much.

He hadn’t exactly softened—his edges were still sharp and exact. But there was a thoughtfulness in him now. An awareness that the world might not always turn at his command. That people did not have to bend to his will.

His fall from grace included time behind bars, and it had been one of the most difficult things we’d had to endure. Like my mother’s death, the consequences he’d faced had been a turning point in his life.