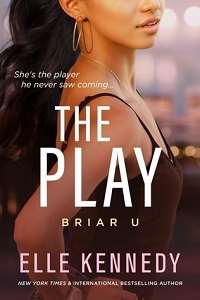 I probably should have stayed at home, but these days “home” is like living on the set of a Kardashian reality show. Thanks to my three female roommates, it’s estrogen overload over there.

Granted, there’s a helluva lot of estrogen here at the Theta Beta Nu house, but it’s the kind I’m allowed to be attracted to. My roommates are all in relationships, so I’m not allowed to touch them.

You’re not allowed to touch any of these women either…

True. Because of my self-imposed abstinence, I’m not allowed to touch anyone, period.

Which raises the question—if a tree falls in the forest and you can’t fuck anyone at the sorority-house party, is it still considered a party?

I curl my fingers around the red Solo cup that my friend and teammate Matt Anderson just planted in my hand. “Thanks,” I mutter.

I take a sip and make a face. The beer tastes like water, although maybe that’s a good thing. A nice incentive to not consume more than one. Morning skate isn’t until ten a.m. tomorrow, but I was planning on showing up at the arena a couple hours early to work on my slapshot.

After last season’s disastrous end, I vowed to make hockey my top priority. The new semester starts Monday, our first game is next week, and I’m feeling motivated. Briar didn’t make it to the national championship last year and that’s on me. This season will be different.

“What do you think about her?” Matt discreetly nods toward a cute girl in tiny boxer shorts and a pale pink camisole. She’s not wearing a bra, and the outlines of her beaded nipples are visible beneath the silky material.

Did I mention this is a PJ party? Yup yup, I haven’t had sex in nearly five months and I’m kicking off junior year at a party where every single woman in attendance is wearing next to nothing. I never claimed to be smart.

“I would, but…” He lets out a grumbling sound. “She’s checking you out.”

“Well, I’m closed for business,” I answer with a shrug. “Feel free to go over there and tell her that.” I poke him good-naturedly on the arm. “I’m sure she’ll view you as an adequate consolation prize.”

“Ha! Fuck off. I’m nobody’s second choice. If she’s not dying to hook up with me, I’d way rather find someone who is. I don’t need to compete for a woman’s attention.”

This is why I like Matt—he’s competitive on the ice, but off of it he’s really decent. I’ve been playing hockey my entire life, and I’ve had teammates who wouldn’t even blink at stealing another guy’s girl, or even worse, hooking up with her behind his back. I’ve played with guys who treat our hockey groupies as disposable, who’ve shared girls like Tic Tacs. Guys with zero respect and terrible judgment.

But at Briar, I’m fortunate to play with some stand-up dudes. Sure, no roster is without a douchebag or two, but for the most part my teammates are good guys.

“Yeah, I don’t think it’ll be too hard,” I agree. “The brunette at two o’clock is already boning down with you in her head.”

His brown eyes widen in appreciation as they land on the curvy girl in the short white nightie. Her cheeks flush when their gazes meet and then she smiles shyly and raises her cup in a silent toast.

Matt abandons me without a backward glance. I don’t blame him.

The living room is packed with girls in lingerie and guys in Hugh Hefner pajamas. I hadn’t known this was a theme event, so I’m in cargo shorts and a white wife-beater, and I’m good with that. Most of the dudes around me look ridiculous in their get-ups.

“Having a good time?” The music is blaring, but it’s not loud enough that I don’t hear the girl. The one Matt had originally been checking out.

“I know who you are.” Sympathy creeps into her voice. “I was there for the conference championship against Harvard, when that jerk broke your wrist. I can’t believe he did that.”

I can. I fucked his girlfriend.

But I keep that to myself. It’s not like I did it intentionally, anyway. I had no clue who that girl was when I slept with her. Apparently she knew who I was, though. She wanted to get back at her boyfriend, but I didn’t know that until he launched himself at me in the middle of the second-most important game of the season, the one that determines who goes to the Frozen Four, the first-most important game of a college season. The broken wrist was the result of a tackle to the ice. The Harvard asshole didn’t intend to break it, but it happened, and just like that I was out of the game. And so was our team captain, Nate Rhodes, who was ejected for fighting while trying to defend me.