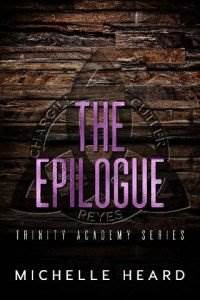 “Da-fuuck,” Mason exclaims nervously as he and Falcon guides a blindfolded Julian toward the dock. “Guys, this is fucking high.”

I bite into my bottom lip to keep from laughing as Julian’s face tightens.

“It will be a rush,” I add, my voice thick with amusement.

For Julian’s bachelor’s party, we kidnapped him. After we shoved him into the car, Falcon blindfolded Julian and told him we were all going bungee jumping. Our fathers, Carter, and all the guys from Indie Ink will meet us by the lake.

I’m so damn proud of the prank I came up with. Instead of jumping off a bridge, Julian’s only going to jump off the dock into the water. I even hired an instructor to keep things as close to the real thing as possible.

“I can’t believe you’re trying to kill me three days before my wedding,” Julian mutters, his voice tight with nerves.

Reaching the dock, I move forward to shake the instructor’s hand. “Hey, Mark. Good to see you again.”

Everyone takes a moment to greet each other, then Carter says, “Don’t worry, Julian. We’ve jumped before. It’s a rush.”

“My definition of a rush is landing a new deal, and not throwing my self off of a bridge,” Julian grumbles.

Mark grins widely, then asks, “Will the groom be jumping first?”

“Yes,” Falcon answers, leading Julian to the middle of the dock.

“Great, let’s get him geared up.” Picking up the harness, Mark begins to put it on Julian, who seems to be getting paler by the minute. When he has Julian all strapped in, Mark asks, “Did y’all sign the consent form?”

I pull a piece of paper from my pocket and make sure it crinkles, so Julian will hear it. “I have it right here.”

“Thanks.” Mark takes the paper and shoves it in his pocket then proceeds to place a helmet over Julian’s head, then excitedly says, “Okay, let’s do this.”

Mark pretends to open a gate using a metal clip to make a clanking sound, and instructs Julian, “Take three steps forward.” He helps Julian, who carefully inches closer to the edge of the dock. When Julian’s toes go over the side, Mark exclaims, “Stopstopstop! That’s the edge.”

Julian freezes and lets out an anxious breath. “Fuck, this is insane.”

“Let me do one last check of your harness,” Mark says, and he shakes the cord for added effect. “Great, when you’re ready, just lean forward and fall. Don’t jump.”

“Just lean forward and fall,” Julian grumbles sarcastically. “I can’t believe I’m going through with this.”

“It will be a great experience,” Rhett calls from where he’s standing to the side so he can record the moment.

Julian’s features tighten even more as his hands open and close into fists. “I seriously can’t believe I’m doing this.”

“Are you ready?” Mason asks.

Julian scoffs, “I’ll never be ready. This is insane.”

I take a step forward. “On the count of three. One.” Julian shakes his arms out and takes a couple of deep breaths. “Two.” I struggle to hold my laughter back as his breaths speed up. “Three!”

“I don’t think I’ve ever heard you curse that much,” Mr. Reyes comments.

Mr. Reyes lets out a deep chuckle. “Under the circumstances, it’s okay to curse.”

“I’m jumping after you,” Falcon says to encourage Julian.

“Okay.” Julian shakes out his arms again and bends his knees slightly. “Fuck.” He sucks in a deep breath, and then he falls forward. The splash is loud, and it has all of us laughing. The moment Julian’s head breaks through the water, he shoves the blindfold back. “Fuckers. The whole lot of you.” There’s a huge grin on his face as he swims back to the dock. “I went through all of that for nothing.”

Falcon holds out his arm to help Julian out, and the moment Julian grabs hold of his hand, he yanks Falcon into the water. “My phone!” is all Falcon gets out before the water engulfs him.

“Let’s jump,” Mason says as he pulls his phone from his pocket, setting it down on the dock. I do the same and let out a holler as I run and leap into the air with Mason right behind me.

Carter and the other guys join us as well, but Mr. Reyes, Mr. Chargill, and Dad just watch us, laughing their asses off at our expense.

Mason swims to the dock and holds his hand out. “Help me out, Dad.”

Mr. Chargill falls for the same trick he caught Mason with when he yanked him into the pond while we were golfing.

Once Mr. Chargill is done wiping the water from his face, he shoots Mason a playful glare. “Little shit.”

The moment he looks at Mr. Reyes and my dad, Mr. Reyes shakes his head. “I’m not helping any of you out.”