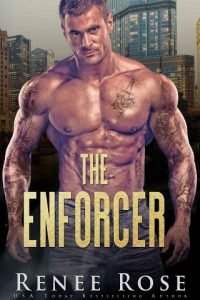 Closing time at Rue’s Lounge is the worst part of every week. I drain the last of my beer and set the bottle down, reluctantly rising from the table I staked out early in the night. Story, my American songbird, and her bandmates gather around the bar, still pumped with energy from another epic performance.

I hesitate, but there’s no excuse to remain. Not when Rue, the mohawked owner, has already turned on the overhead fluorescents to drive the last patrons out. Not when she’s specifically pointed at me and jerked her head toward the door.

I have no reason to stay. I’m not hanging around working up the nerve to ask Story out.

That would be impossible without a tongue.

I won’t invent some other way to connect with her, either. I’m not the guy for her. I know that.

And I don’t stay to clock more hours staring at her. Well, maybe some of that. It’s pretty fucking hard to look away when she’s in a room. The honey-voiced lead-singer and guitarist is magnetic. Mesmerizing. Gloriously talented and punk-beautiful.

No, I stay because I’m incapable of leaving. I can’t quit the premises until I’m absolutely sure Story will get home safe.

I watch her down her third margarita in a few swift gulps and then laugh at something one of her friends says. Her Debbie Harry bob is a pale pink this week—she added a tint of champagne to her usual platinum, which makes her pale skin glow. She’s so beautiful it hurts.

I force myself to walk out.

I know the bar’s familiar to her, and she has lots of friends there. She also has her bandmates, which include her brother. They should all look after her. But there’s alcohol involved. Possibly drugs. And I know I’m not the only mudak harboring wicked thoughts about what they’d like to do with the enigmatic singer of the Storytellers.

The band members sometimes stay and drink after Rue’s closes, which is legal since they’re on the bar’s payroll. Those nights, I sit in my Yukon Denali and wait until I see Story get safely in the band’s van or leave with someone she knows.

Tonight, they all head out with their groupies after me. I won’t have to wait long.

Soon she’ll be safely out of my sight. I can go to the penthouse and start the countdown until she plays next week over again.

I walk to my vehicle and lean my forearm on the hood, waiting to make sure she gets out of here safely.

Story weaves as she clops through the parking lot in her Doc Martens, the alcohol obviously hitting her. Her fishnets sport a tear up one thigh that makes me want to finish the job. Rip them open and lick my way to the apex of those shapely legs. Only I don’t have a tongue to lick with.

Blyad'. I haven’t been with a woman more than twice since it was taken from me. I don’t know how I’d make love to Story without the goddamn tip of my tongue.

Her brother—the ladies man of the band—has a hot girl tucked under each arm, and he walks behind his weaving sister toward their van. His van—I think. At least, he usually drives it.

She has a tiny Smart Car she shows up in now and then.

Flynn says something to Story and veers away from the van, taking his two dates with him.

“What? Wait—Flynn—you can’t!” Story hollers at his back.

“I had too much to drink to drive home.”

Flynn isn’t even listening. He’s saying something to the girls, and they’re giggling in response.

The rest of their crew has scattered to other vehicles, leaving Story alone with the van.

Blyad'. I’m not the guy to go and tell her not to drive drunk. Again—I obviously don’t—can’t—tell anyone shit.

“Flynn!” Story calls after her brother. “Can’t you drop me off first?”

“I’ve been drinking, too,” he says although I think he’s probably in far better shape than his sister.

I step away from my vehicle to show myself. I hold up my keys and point to the Denali. It’s about as close as I’ve come to communicating in a long fucking time. I usually don’t even try. That way people stop trying to connect with me. To include me. That way, I become invisible.

As much as a guy who’s six-foot-six and two hundred eighty pounds can be invisible.

Story sees me and hesitates. I can tell she read my offer. She’s considering it.

Part of me wants her to reject it. She shouldn’t get into cars with men she doesn’t really know. I mean, she knows me from a bar, but I could be any kind of creep.

But her shoulders sag in defeat. She holds her keys up and waves them at me. “Oleg—can you drive me home?” she slurs.

She wants me to drive her van.