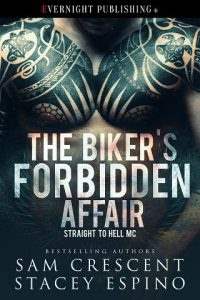 Tank's bigger and badder than most of the bikers at the Straight to Hell MC. He's used to being feared by everyone—then there's Bell. The curvy blonde waitress doesn't move out of his way. For some reason, she sees the best in him, never judging him for his past or present. Her sweet love and innocence become addicting. It's nice not being the monster for once. But she has a tangled past that his prez doesn't like. Tank's faced with an impossible choice—love or his club.

Bell doesn't want to end up with a loser like her deadbeat mother. She wants to make something out of her life, even though it's easier said than done. Tank's a big teddy bear and doesn't even realize it. He's caring and protective and even though she shouldn't fall for a bad boy, it's impossible to keep away from him. The only problem is her boyfriend is keeping her a secret, and secrets are never a good thing. Will he decide to put her first or will their love stay a forbidden affair?

The open road called to him.

Tank revved his engine, winding around the dirty road, feeling the freedom of being on his bike. He wasn’t wearing a helmet, he never did. There was nothing free about wearing something on his head when all he wanted to do was feel the wind in his hair. Not that he had it long. He couldn’t stand long hair, and he much preferred it short. It was far easier to keep clean.

Back at the Straight to Hell MC clubhouse, a party was going on. Normally, he liked to pick up some willing pussy and party until he couldn’t remember his own name, but that didn’t hold any appeal to him right now.

There was nothing enjoyable about a woman who didn’t know who she was screaming for. He was clearly getting way too old. What kind of man was he when a woman riding his cock didn’t hold any appeal? If the guys could see him now, they’d be laughing their asses off. Not Lord or Brick. Those men had found women. He still couldn’t believe their club president and VP had found … love.

They were not the kind of guys to settle down. They were the ones to fuck and leave a trail of women. Fortunately, they all bagged their dicks, otherwise, there would have been a herd of kids. As it happened, there were just scorned women.

Tank got it. The call of the club was too strong. Thinking you could live without this life was a fool’s thought. There was no way anyone was stepping back from this life. Not for a second.

Unless he fell for a club woman, there was no one for him.

Tank brought his bike to a stop at the edge of the road that looked across the town and forests. He loved to get high up even though he was only an hour away from the clubhouse.

Life had seemed kind of easy for the past couple of months. He didn’t like an easy life. It always had a way of throwing a whole heaping pile of shit right in his lap.

The rest of the club was happy for it. They partied harder. Enjoyed life.

Tank wasn’t like that. He liked to be ready for whatever was coming his way.

Straight to Hell MC had a lot of enemies, and something big was coming. He didn’t know what, but he wanted to be ready.

He took a deep breath, inhaling the fumes from his bike as well as some modicum of fresh air, kicked off, and headed back toward his clubhouse.

The drive no longer settled him, and he didn’t like it. Maybe he was having a mid-life crisis. Or completely losing his mind after one too many benders.

Tank didn’t think he was the kind of guy to have a sixth sense, but something wasn’t sitting well with him. Maybe it was the Skull Nation, their closest enemy. Or maybe it was something else.

He slowed down his bike as he caught sight of a figure at the side of the road. Squinting to see, Tank slowed down when he saw a woman. Was she drunk?

She didn’t appear to be losing her footing, and she walked in a straight line. Definitely not drunk.

Tank made out a pair of jeans, and she was clearly wearing a large shirt as it came down to her ass. She had long blonde hair that she’d left down in waves. There was a bag high on one shoulder.

All of this in one quick glance.

He slowed his bike down to a slow crawl, and the woman in question stopped and turned toward him.

“I have pepper spray,” she said, holding her hands around a can.

Tank stopped his bike, turned off the ignition, and held his hands up. “I’m not here to hurt you.”

“Then why did you stop?” she asked. “I’m not taking up any room on the road.”

“It’s not safe for a woman to be walking down this road all by herself.”

She chuckled. “Why? Because of the clubhouse I’m going to be passing?” she asked.

Tank frowned. He was used to normal, civilian women being afraid of the club. She’d already spotted his leather cut, showing he was a member of said club. He wore his leather cut with pride. He’d earned his patch and then some.

“Are you stupid?” he asked.

The laughter stopped. “No, I’m not drunk, and I don’t have to listen to you insult me. I pass this club every other day, and besides a few whistles, they’re like giant teddy bears.”

This did make him burst out laughing. He just couldn’t help it. There was no way the guys would accept her calling them all teddy bears. Not with the shit they did on a daily basis.