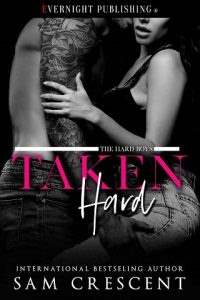 Lilly Jewel watched as Caleb Hard tried to avoid three women at the bar. She rolled her eyes at just how stupid his behavior was. Everyone in town knew he was a player. The Hard boy rebel. The one who would sleep with you and forget your name the next morning. According to many of the women, he wasn’t a nice man. The problem was, Caleb was, in fact, very nice. He never actually told any of the women he’d be available long-term. They were the ones to assume they’d be the woman to tie him down.

So far, no one had tied that man down, and she pitied the woman or women who even tried.

Caleb got to the bar and let out a shudder. “Beer, please.”

Lilly got him his usual, placing it in front of him. “Maybe you should start finding another place to go pick up women. I think you’ve exhausted the town.”

“Nah, it’s just a rough night. How are you doing?” he asked.

“Me?” She frowned, glancing left and right, while also pointing at her chest.

“Yeah, silly. I was curious how you’re doing these days. Hanging out with Aunt Betty, that woman is a hoot. She warned me not too long ago about sticking my dick where it didn’t belong.”

Lilly couldn’t help but smile. Aunt Betty was the woman she lived with, and she helped keep an eye on her. Long story short, Eliza, Aunt Betty’s niece, had come back to town, fallen in love with the oldest Hard boy, James, and they were now happily married with a baby girl, Darla.

She adored Eliza and their little baby. James wasn’t so bad either, but Lilly had done everything she could to avoid men in her life.

Her mother was known as the town whore. She would sleep with anyone and didn’t even need a price to do it. Purely because of her mother’s reputation, Lilly had been branded the same, and as such, men thought it was well within their rights to touch her.

Working at the bar gave her a little extra spending money, while her work at the library gave her peace and quiet.

She’d had no choice but to give up her idea of college and had been working full-time straight out of graduation. One day soon, she hoped to be able to afford some night classes.

Her true passions in life were books and writing. Whenever she got the time, she sat at her secondhand laptop, typing away. In the past four years, she’d written over fifteen novels. All of them romance, none of them any good. She loved to write and read.

Caleb clicked his fingers in front of her face. “Earth to Lilly.”

She waved his hand away. “Sorry, I was off in my own little world there. What were you saying?”

“You really are an interesting woman. I was only asking how you are.”

Lilly chuckled. “I’m fine. Aunt Betty is fine. Have you been by to see James and Eliza?”

“Hell, no. I don’t go see them. I go to see that gorgeous niece of mine. She’s the only woman, besides you, that doesn’t give me the stink eye.”

“Oh, I give you the stink eye, Mr. Hard, just not for you to see.” She gave him a wink, laughed, and saw someone signaling for a drink. “Have fun.”

She turned and attended to several customers down the counter. Some of them regulars who were really nice. Others, not so much. Then there were the few travelers and tourists. Once they were all served, she gathered up the empty glasses, taking them around back to be cleaned.

When she came back, she saw Caleb still seated at the bar, and what was more, he continued to watch her.

“Are you making sure I’m doing my job properly?” she asked, hand on hip. She couldn’t recall him ever sticking around for long. In the last year, though, since Eliza had been back and introduced them, she saw him constantly.

She smiled. “Thanks.” Lifting her hand, she tried to stifle a yawn. She hadn’t gotten a lot of sleep the past few days.

“Yeah, I’m fine.” She glanced around the bar, seeing several women looking in his direction. “Caleb, why aren’t you hitting on any of the women? Don’t you need to find yourself a partner for the night so you can sneak out?”

“Your reputation will take a hit.”

“Wow. I don’t think I’ve ever seen or heard you like this before.”

Caleb rubbed at his face, and she studied him. His arms were heavily inked. The sexiest mechanic in town. Even before Eliza had introduced them, Lilly knew who he was. Her mother had a bit of an obsession with the Hard men. In all her years, she hadn’t been able to get into the pants of the Hard boys. That revelation shocked Lilly. Her mother liked to brag about proving men were scumbags only after pussy.