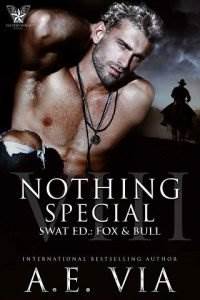 Fox’s breathing was even and his heart calm as he and his team barreled onto the chaotic crash site a block away from the Wells Fargo bank in downtown Atlanta. That was as far as the panicked robbers got after one of the tellers activated the silent alarm. Police boxed them in, causing the obvious amateurs to overreact and wrap their getaway van around a stoplight.

The police thought they had the situation contained until the men fled on foot and hijacked a MARTA bus half full of innocent passengers. FBI, patrol cars, officers, and yellow crime scene tape littered Broad Street, forming a barricade to keep the pedestrians and news cameras at a safe distance. Police helicopters hovered overhead, ready to assist if their hostage situation turned into a fucked-up reenactment of the movie Speed.

Fox spoke into the mic on his chest. “Fox twenty to dispatch. Be advised… SWAT is on the scene.”

“Acknowledged, Fox twenty. SWAT has command,” the operator returned on the radio.

“Sarge, I want you to squeeze us right up against that building there and away from those cars,” Fox told her. “If they try to make a run for it, we’ll block ’em in at the next corner.”

“Roger that,” Dinah answered and swung their armored BearCat vehicle around with mastered ease.

“Hart ten to command,” Fox’s captain, Ivan Hart, communicated directly to their headquarters. They had their own command center providing them with immediate intelligence and surveillance most officers didn’t have readily available in the field. “What’s the negotiator’s last threat level? Over.”

“Threat level progressed from yellow to red at fourteen-thirty hours. Over.”

“Copy that,” Hart answered, then turned to face his team. “All right. You heard it. Threat level is red. Let’s end this fast.”

Fox clutched his rifle to his chest and leapt down from the dark vehicle, taking the lead of their four-by-four pyramid formation. They’d rehearsed their approaches so many times that it looked more like a well-choreographed dance than an entry breach. Four of their shield men moved to the front to protect them from retaliatory fire. While they waited on Hart’s order, Fox took in the terror around him. It should’ve concerned him that there were an unknown number of armed men just ten yards in front of him, swearing to kill them if they came any closer. But instead of being afraid, Fox squeezed the butt of his IC-B5 rifle, ready to take these motherfuckers down. He could hear the panicked screams of the bus passengers as the thieves yelled demands through the partially open door.

Fox’s captain approached the negotiator’s unmarked vehicle and took the handle of his megaphone mic. Once SWAT was in the field, they had complete authority. Hart’s close-combat, special tactics unit was the city’s last line of defense against more serious threats. The officers taking cover behind their squad cars seemed more than happy to allow Fox and his captain to bring this mayhem to a peaceful end.

“Good to see you guys, Cap.” The negotiator, Special Agent Roch, who they knew well and encountered often in the field, clamped Hart on his shoulder, then wasted no time giving them the details they needed. “Got eleven passengers on board, an unconscious driver, and three gunmen.”

“Radio said there were four men in the bank,” Dinah noted.

“The one who fled on foot wounded two officers before he was apprehended. The other unknown targets are inside. They knocked the driver out and tried to operate the bus, but MARTA shut it down. It’s not operable at all.”

“Good,” Hart grumbled, then turned to Fox. All he could see of his captain behind his tactical helmet were those ice-blue eyes and his chest-length beard. “What you got, Fox?”

Fox took the tablet Dinah handed to him. “The last footage we have from the bus camera was nine minutes ago before one of the assailants busted it out of the dashboard. The windows are tinted too dark, so we’re blind. They can see us, but we can’t see them.”

“What about flash-bangs?” Dinah asked.

Hart shook his head. “No. We could end up hitting a passenger. We got elderly and a child on board, so gas is also out.” One of the gunmen yelled for them to get back, but Hart ignored him as easily as one did a mall time-share salesman and continued with his strategy. “If we do a full-force breach in such a tight space, the hostages could panic, and we won’t be able to control who gets struck.”

“Snipers are definitely out,” Fox added. “Those goddamn tinted windows are protecting them.”

“Not anymore. Rectify that problem for me, Fox.” Hart pointed to three of their riflemen. “Take up point with him.”

Fox’s rifle was instantly swapped out by their weapons officer, and he tucked the nonlethal shotgun into the crest of his shoulder, moved up behind the shields, and waited on Hart’s command.