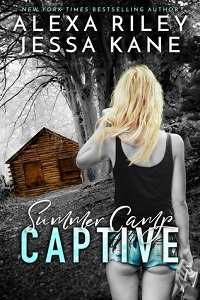 “Legend has it that the Butcher of Braxton Lake stalks these campgrounds, just waiting for one of you to step out of line…”

I roll my eyes at my fellow camp counselor’s story and go back to fixing my s’more. This is my first week at Camp Brax, but I quickly learned tried and true methods for keeping the campers in line. Fear.

With a flashlight poised below her chin, the counselor continues to weave the phony tale, while our charges sit huddled around the campfire, their noses sunburned from a day of swimming in the pool.

“That sound you hear coming from the forest late at night? The grinding and snapping? That’s the Butcher sharpening his teeth on the trees. He needs them to be sharp as spikes, because they’re his weapon of choice for subduing prey.” The counselor pauses for dramatic effect. “He can’t wield an actual knife, on account of his hook hands!”

On cue, I prod the fire with my coat hanger, sending sparks swirling into the warm night air. Squeals ring out from the terrified campers, and I bite back a chuckle. I would have loved this as a kid. Sitting around a fire, linking arms with my friends, knowing tomorrow would be another day filled with adventure. My squeals would have been fake, though. When I was their age, I was too busy being scared of real monsters to worry about fabricated ones.

A crunch comes from the forest behind me, raising goosebumps on my arms. No one else seems to notice, they’re so wrapped up in the story, and I decide I must be overtired. After taking several northbound buses from Texas to reach Michigan, I hit the ground running three days ago, having campers assigned to me and organizing nonstop activities. I’m not complaining, though. The preteen campers couldn’t be sweeter or easier to manage. Although, I’m guessing that’s going to change tonight when they’re all tossing and turning with nightmares.

A too-smooth hand glides along the breadth of my shoulders, and I leap to my feet, spinning around and brandishing my coat hanger like a sword. Somewhere in the woods, I swear I hear a furious growl, but I focus on the immediate threat. “What the—” My heart dislodges from my throat when I see who touched me, but my skin continues to crawl. “Dammit, Manny.”

Camp Brax is a coed camp, but the male bunks are located on the other side of the grounds. After dinner, the male and female campers go their separate ways, so he definitely shouldn’t be here right now. “Do you need something?”

“Now there’s a loaded question.” A suggestive grin spreads across his mouth as he tightens his ponytail. “I came to see if you were up for a night walk. Thought we could check out the stars.”

The words drop dead sit on the tip of my tongue, but I’m the newbie and can’t afford to alienate myself. Needing to get out of Texas pronto, I found the camp counselor advertisement on Craigslist, applied and did a phone interview. My babysitting experience landed me the job and I left the next day. No one would ever think to search for me here. If I start making enemies or offending people, I might not get another cushy gig so soon. Still, I’m not going anywhere with this guy. He’s been a little too welcoming, and I don’t want to give the false impression that I’m interested.

“Um.” I turn to find the campers watching Manny and me, whispering and giggling behind their hands. “Mind if I take a raincheck? I’m going to have twenty traumatized girls on my hands tonight.”

A flash of annoyance flits across his features, and I congratulate myself on seeing through his affable hippy façade. “Sure, sure.” His smile is tight. “I’ll just ask again tomorrow. You’ll have no reason to say no then, right?”

Again, I swear I hear an ominous rumble coming from the darkness. Both Manny and I look up at the sky to check for rainclouds, but it’s such a clear night, I can count the stars. “Right.” I reassure myself by remembering the Swiss Army knife in my boot. “Tomorrow.”

There might have been a slight chance I could leave her alone—very, very slight—but as soon as another man dared to touch her, I knew resisting my growing need for the girl was hopeless. Mine. Mine, motherfucker.

In the decade since I moved to these woods, the camp has been in operation during the summer months. I’ve been a casual observer from the trees, shrugging off their stories about me. Until now. Three days ago, the little tomboy princess arrived, and I’ve been living in misery ever since. My cock hangs stiff and aching in the leg of my pants, throbbing to the sound of her name.