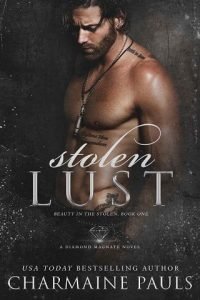 The lights of the casino are dazzling from afar. A blanket of diamonds twinkle in red, yellow, gold, and white. The picture is like one of those snowy Christmas card scenes with the tree draped in tinsel and fairy lights, but in reality, it’s just a cardboard fantasy. I’ve never seen snow. It doesn’t snow much in South Africa. Definitely not around Rustenburg.

Inside, the noise is infinite. Day flows into night and night into day. Whether there’s a sun or moon outside, under the dim lights glowing in the ceiling, all the hours look the same. Slot machines ring out tinny, and over-dressed billboards parade showgirls in fake ostrich feathers. Women feed the machines coins and spin the reels, their concentration on the payline. Men drinking rum or brandy at their stations—the favorite mixes with Coca Cola around here—lift their eyes as we pass.

One of them hollers, “Nice ass.” He pumps his fist, making a gross sign. “Come over here and let me show you who’s your daddy.”

Next to me, Mint glowers, but he avoids eye contact. I’ve already told him we’re not having sex. Maybe he thinks without the extra on the side I’m not worth the fight.

I flip off the guy and am about to pass when he says, “If you don’t want the attention, honey, you shouldn’t dress like that.”

That makes me stop in my tracks.

Taking a wide stance in front of the guy, I prop my hands on my hips. His smile slides, the corners of his mouth drooping like an ice cream cone in the hot sun. The blotchy skin of his cheeks turns red. Bullies never think you’d take them on when they’re bigger than you.

A few men wolf-whistle. The attention makes my admirer snarl. The man criticizing my choice of wardrobe wears a khaki shirt with a fat stain on the stomach, creased Bermuda shorts, and long socks with sandals. To round off the ensemble, a comb is tucked into his sock.

Leaning closer, I say, “Here’s a tip, cowboy. Bad pickup line. If you want some ass, try to be a decent human being.” I run my gaze over him. “Since you obviously do want the attention, I’ll share another secret with you. Dress the part.”

Laughter erupts. Our spectators whistle through their teeth. The guy clenches his coin cup so hard it dents in his fist.

“Let’s go,” Mint says, pulling on the sleeve of my jacket.

I shake off Mint, and the crude fat guy doesn’t exist any longer. The minute I turn for the exit, he’s not worthy of my energy or thoughts. I don’t waste my anger or time on scum. All I want is to get out of there. I hate the noise, and I’ve never been a fan of gambling. It’s not that I have anything against it in principle. I just find it boring.

“I still have chips left,” Mint says. “How about another go at the poker table?”

I hasten my steps. “No, thanks. I have to be up early for work.”

The red carpet with the golden sun imprints smells like stale popcorn. Outside the fast food court, I step on something gooey.

Cursing, I lift my foot. A blob of chewing gum is stuck on the sole of my sandal. Great. This date was a mistake. I never should’ve let Mint wear me down. It took him a year to talk me into it. Why did I accept? Because everyone deserves a fair chance. There’s something attractive in everyone. However, if tonight taught me anything, it’s that there are always exceptions.

After rubbing the gum off on the carpet as best as I can, I continue on my way.

“So,” Mint says, running a step to catch up with me, “my new jewelry store is going to whack another million in less than a year. I reckon I’ll buy a house in Durban.” When I don’t reply, he says, “On the beach.” Still not getting a reaction, he adds, “Frontline beach.”

We hit the cashier desk where the aircon blows at full force. Goosebumps run over my skin.

“Yeah.” I zip my leather jacket up over my camisole. “I’m happy for you.”

“Jeez, that’s so decent of you. Most people are jealous of my success.”

For crying out loud. Doesn’t he get I was being sarcastic?

Rubbing the sore muscles of my neck, I make a beeline for the closest register. I’m dead tired and broke. I volunteered for overtime, doing double shifts of filing at the bank archive where I work as a cashier, and I still feel the strain in my back from being bent over boxes of papers for hours. I wasted precious sleep in lieu of veggie burgers and fries with Mint at Sun City, ominously called Sin City by the folks in our town who condemn gambling. Which is why the gambling happens on what was previously the other side of the South African border, on the Bophuthatswana side. Sol Kerzner didn’t have a choice. When he built the casino, gambling had been illegal in South Africa. Bophuthatswana had since been reintegrated into South Africa.