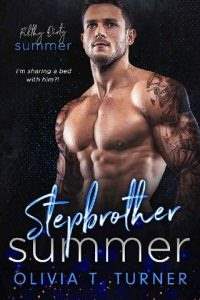 “I don’t think you’re prepared for how nice this place is,” my dad says with a grin as we roll down Route 27.

“How nice can it be?” I ask as I roll the car window down and the relaxing scent of salt air hits my nose. I moan as I inhale deeply, taking it all in. I can already taste the ocean.

“You’ll see,” he says with a chuckle.

We’re heading to his new wife’s beach house in The Hamptons for the summer. Well, not the whole summer. Just for a month. An amazing month of sun, beach, fun, and some epic tanning.

“I’m so excited for you to get to know Debra and Ollie,” he says as he changes the radio station. “You’re going to love them!”

I suck in a breath as I turn to the window. The kid in the backseat of the car next to me is waving at me, but I can’t do much more than stare back at him with dead eyes.

I’ve only met my new stepmother a couple of times, but it was always at my father’s work functions. She’s the founder and sole owner of the company my dad is the CEO of—Global Chem Solutions. It’s a chemistry engineering company that makes all sorts of weird products including a non-tearable rubber and their latest product—a new line of cement that absorbs CO2 instead of releasing it.

Apparently, my dad and her had a secret office romance going on for two years before they left together to go to a work conference in Paris and came back married.

I’m still trying to wrap my head around it all.

“So, you’ve met Ollie?” I ask him as the kid stops waving at me and gives me the finger instead.

I haven’t heard anything about my new stepbrother. I haven’t even seen a picture of him. And I’m intensely curious since this is the closest thing to a sibling I’ve ever had.

“He’s smart,” my dad says proudly. “He’ll be starting his last year of MIT in the fall, getting his masters in chemical engineering like his mother.”

Oh great. That’s just what I need, another chemistry dork around the kitchen table fanboying over the periodic table with our parents while I sit there completely lost. The only thing I know about chemistry is that I hate it.

My dad scoffs. “Not everyone who is into chemistry is a nerd. I mean, look at me!”

I look at my dad with his cargo shorts, New Balance shoes, white socks pulled up his calves, thick glasses, and I bite my tongue. “Of course not,” I say flatly. “What was I thinking?”

He nods in satisfaction as he turns back to the road.

“Ollie is actually quite the athlete,” he says. “He reminds me of me when I was his age.”

I snort out an involuntary laugh. My dad was the furthest thing from an athlete when he was in college. My mom used to show me pictures before she died five years ago. He was as pale as a vampire with the scrawny physique of a ten-year-old.

“All I ask is that you’re open to getting to know him. He’s your stepbrother now and I’d like to be a family.”

“We already are a family, Dad.” A small family, but still.

“You know what I mean,” he says with a sad smile. “Nothing is ever going to replace your mother, but we can move on. We must move on. Debra and Ollie are special people and I hope that one day you’ll love them as much as I do.”

I feel nauseous as we drive along Montauk Highway. We pass a gorgeous gas station and an adorable diner that is selling ‘the best lobster rolls in the world’ according to the sign. Everything is a little nicer in The Hamptons.

Since that fateful car accident, it’s just been me and my dad. Years of the two of us on Christmas mornings, birthdays, graduations—it’s just been us. A team. A family.

It hits me right in the chest knowing that he has this whole other side of him that I’m not a part of. A new wife I barely know. A chemistry-loving stepson who he probably has more in common with than me. I don’t know… None of this is sitting right with me.

I know it’s selfish. I should be happy for him. I should be thrilled that our tiny little family has doubled, but I can’t help but shake this feeling that I’m being left behind.

“Wait until you see this,” he says with a grin as he hits his blinker and turns off the road. “Look at what my sugar mama’s got!”

“Holy shit, Dad!” I shout as we ride past one huge beachfront mansion after another. “Is her vacation house on this street?”