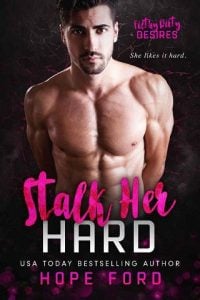 I’m pushing his hand. I know I am.

But something has to be done. We definitely can’t continue like this.

I started working at Tate Marketing exactly three weeks ago, and since then, my world has been turned upside down. It’s not the job. I love the job. It’s challenging, and as a junior marketing executive, I’m learning so much.

No, what has completely messed me up is the fact that I’m being stalked... by my boss.

It's been like this since day one. The day I came and interviewed for the job with Mr. Tate. I was hired on the spot. I'm good at what I do. I create ad copy and ad campaigns that sell. I've definitely proven myself in the short amount of time that I've been here, but I've learned that it might be possible that Mr. Tate hired me for other reasons.

I knew when I interviewed there was some chemistry. I felt it for sure. I knew it was a bad idea to accept the job, but he made it to where there was no way I could have turned it down. The pay he started me at is high, and I don’t know any entry level marketing position that pays what he pays me.

When I accepted, I planned to just suck it up. I could work with him and let my little annoying crush dwindle away. Surely, he’d end up being an ass that yells or he’d be arrogant and ruthless. But it didn’t work out that way. If anything, he’s patient and ethical. He goes out of his way to help his employees, and he’s fair. Which makes me want him even more.

On the second day on the job, I started getting texts from him. Completely inappropriate texts, but I didn’t care. He told me he liked my skirt, and I wore one just like it, but shorter, the next day. He told me he liked my hair down, and it hasn’t been up since. It’s not been anything too out of the way, but each and every text holds the promise for more.

And then I felt him watching me. Anywhere I went, there was someone following me, but no matter how hard I looked, I never saw anyone. At one point, I was scared. It must have literally been on my face because I got a text from Mr. Tate.

I remember looking at my phone, wide-eyed. Mr. Tate was following me.

I remember going home and drawing the shades to my apartment over my parents’ garage. I was nervous, knowing that a man—a much older man—was following me. But the more I thought about it, the more excited I got. So excited that I started to enjoy it and play with him a little. I went to an “R” rated movie and watched it. I know he was there, but he never showed his face to me. When I got home that night, he sent me texts, innocent at first, asking me what I liked about it. But then the texts got bolder. He told me what he wanted to do to me, how he wanted to bend me over his desk and make me his.

So it became a game. I looked for ways to tantalize him, and he continued to flirt on text and secretly stalk me. But at work, it was like there was nothing between us. When we were face to face, it was like he was looking at a stranger. I couldn’t read anything in his eyes when all I could think about was his fantasy, of bending over his desk and letting him have me.

So here we are. I’ve ignored all his texts today at work, leaving them unread. It’s killing me to know what he’s saying, but I’m determined to push his hand. One way or another, this is going to end.

“You look beautiful, where are you off to?”

I look at my coworker Christy. She’s been a good friend to me since I started here. She’s patiently taught me all the ins and outs of everything. I smile at her and try to seem excited. “I have a date.”

Her face brightens. “Ooooh, a date? That’s so exciting. With who? Where are you going?”

I’m loud as I answer her even though I don’t really think I need to be. It seems that Mr. Tate knows everything already, but I do it anyway. “It’s a guy I went to college with. He’s asked me out a few times, and I finally agreed. It’s time for me to start dating.”

Christy sits on the edge of my desk. “And where are you going?”

“Just to dinner. We’re going to try out that new Italian restaurant that opened up down the street last week.”

Christy snaps her fingers. “Antonio’s? You’ll have to let us know how the food is and we can all go to lunch there one day.”