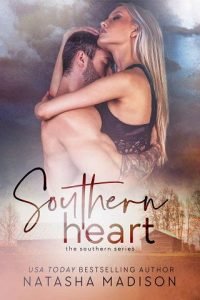 After putting the truck in park, a smile spreads across my face as I look out at all the trees. "It’s good to be home." I get out of the truck and notice the wind has picked up when I hear the leaves rustling in the trees. I spend an extra second just to take it in again. Living in the city, I don’t have any of this. I have car horns and sirens.

The blue sky has clouded over, and my blond hair covers my face now. I don’t know why, but the air smells so different here than anywhere else. It just smells like home. My black ballerina shoes are no match for the rocks in the driveway, so it’s time to dust off the cowboy boots.

I hear the front door open and look up, seeing my brother, Ethan, coming outside. His whole face lights up with a smile. "Well, well, well," he says, coming down the front steps of his house. "If it isn’t Care Bear."

I shake my head at the nickname he gave me when I decided to go into nursing. "How long are you going to keep that up?" I ask as he gets closer to me, grabbing me and pulling me close to him.

My hands go around his waist. "Welcome home," he says, putting his chin on top of my head like he always does.

"It’s good to be home," I tell him. Five years ago, I decided I would try my hand at being a nurse. I wasn’t sure how I would like it, but I fell in love with it and graduated last week at the top of my class.

"Is Mom all over you?" He lets go of me now as we walk into his house.

"Let’s just say that I’m happy I have my own house." We both laugh. Even though my parents expected me to move back home and had my bedroom all ready, I needed to have my own space.

"I’m still surprised she went for that." He looks over at me.

"Oh, she didn’t at first." I stop when I get up the two steps. "But then I threw in that you disappeared from our lives for five years." When he was twenty-one, he found out that his father was not Jacob. He didn’t handle it well and took off for five years, cutting everyone off. It was a rough time for everyone, but he’s home now.

"Nice." He pushes my shoulder now.

"Daddy!" Gabriel, his four-year-old son, yells his name and then looks down the hall and sees me here, and his blue eyes sparkle. "Auntie Cece!" he yells, running to me, and I bend down to grab him in my arms. He wraps his arms around my neck and his legs around my waist.

I turn my head to kiss his neck just as I did when he was a baby. "I can’t even pick you up." I pretend he’s too heavy. No one knows I made the decision to become a nurse because of Gabriel.

One looked at him and I fell so madly in love with him I couldn’t explain it. I also got this fear he would get sick, and I wouldn’t be able to actually help him. "Have you been eating your vegetables?"

"I did." He squirms to get out of my embrace, and I see he’s really gotten big since the last time I saw him six months ago. "Feel my muscles." He puts up his hand, and I squeeze it.

"I think you are even bigger than your dad." Bending to kiss him on the neck and blow bubbles in his neck. He squeals out in delight, and it’s music to my ears.

"Chelsea." I hear my name being called and look up to see my sister-in-law, Emily, coming toward us with a baby on her hip. The smile on her face matches Ethan’s.

My one-year-old niece, Aubrey, chews on her finger while she looks at me and smiles. "Well, hello there, pretty girl." I take her from Emily, and she claps her hands, showing me her gummy smile.

"You look fabulous," she says to me. "I love those jeans." I nod, looking down at the black jeans I put on today with a white shirt and short black leather jacket. City chic but also okay for the country. "What are you doing here?" Emily asks, and I just look at her.

"I’m here to babysit my two favorite people in the whole world," I tell her, looking at my brother. "Someone called and begged and pleaded."

"I did not beg or plead," Ethan says, walking to Emily and putting his arm around her shoulders.

"He said he’s naming the next baby after me." I wink at her, and they both laugh now.

"I just made her feel just a touch guilty that she hasn’t put Aubrey to bed in six months," he says, turning now and walking into the house.