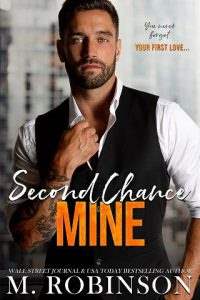 You never forget your first love…

Every stolen moment we had between us was forbidden.
She was off limits.

I wish I could say I followed my own rules.
I didn’t.
I couldn’t.
I lost her trying to make her mine.
Because in the end…

She was always my brother’s best friend.

I was a man who prided himself on control, and for a brief moment, I didn’t have any. After ten years of not seeing Paige’s beautiful face, I never imagined she’d be standing right in front of me—in my friend Tristian’s home of all places. They were throwing a party for the baby he and his wife Belle were expecting.

I didn’t usually make time for these types of celebrations. Not because I didn’t want to. It was due to the fact my company demanded my undivided attention. I was the definition of a workaholic. Except it didn’t feel like work, I genuinely found happiness in being the best at what I did.

I was only there to meet his wife’s executive assistant. When I spoke to Tristian two months ago, I told him how difficult it’d been for me to find one who was worth a damn. I had yet to hire anyone who could fill the demands I required. Since his wife was pregnant, she offered her executive assistant (EA ) EA for the time being, and I was in no position to turn down her offer.

Belle and Tristian were born into corporate empires. Their families had a generational rivalry for decades until they tied the knot a couple of months ago. Overnight, they became heirs to their families’ legacies, but they also worked their asses off to fill in the roles as CEOs for their respective businesses. I knew if Belle was referring to her EA, then she’d be at the top of her game and that was what I desperately needed.

For the next six months, I wanted someone who worked as hard as I did at my company. I was the CEO of ACE Enterprises, which I established seven years ago. I was the best corporate raider in the industry; buying businesses and selling off their parts was what I excelled at. Hence, the name of my company. After two years, ACE went public and within a year, we were already a Fortune 500 company.

At the time, we were top ten on that list, and I wouldn’t stop until we were number one.

However, my thoughts suddenly shifted from work to the woman I couldn’t take my eyes off of as I followed Tristian into his kitchen. She was talking to his wife. It was only then I realized…

I was there to meet her.

“Paige,” Belle announced to us, nodding in our direction. “I’d like to introduce you to—”

As soon as her gaze locked with mine, I was thrown back to another place and time. Instantly, my mind raged war within itself, consumed with the memory of the last time I saw her hazel eyes connecting with mine. Although, the hurt expression on her face back then was much different than how she was furiously glaring at me at this moment. I couldn’t decipher which was worse.

The past or the present.

The unexpected rage in Paige’s stare was enough to render Tristian’s wife speechless.

Within seconds, Paige spewed, “What the fuck are you doing here?”

Her sharp tone caught them off guard. Belle lightly gasped while

Tristian immediately asked, “I take it you two know each other?”

Without taking my intense stare off of her, I responded, “You could say that.”

“You could say a lot of things,” she added. “Most of them would be lies.”

“Don’t you dare call me that,” she warned through a clenched jaw.

The memory of why I gave her the nickname played out between us as if it were happening right then and there and not almost a decade and a half ago. I’d be lying if I said I never thought about her. Especially when I was around my younger brother, who used to be her best friend.

Paige’s steady composure was solid while she continued to act like she wasn’t once mine. It didn’t matter how pissed off she appeared, I knew what was beneath her blue dress and fuck-me heels.

Shifting my gaze to Tristian, he read my mind.

She nodded. “We’ll be in the living room.” They left, leaving us alone in their kitchen.

Despite Paige’s anger directed at me, I swept a strand of her bright red hair away from her face and placed it behind her ear like I used to. Only reigniting this deep connection that had always been there between us.