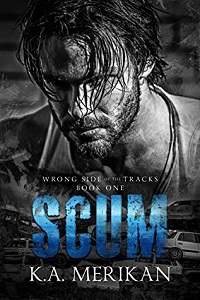 Tonight, Shane would ruin two lives in one fell swoop, and he couldn’t wait.

When he rode his bike, all the injustices of the world hid in the shadows, but as he pulled onto the university campus and had to slow down, reality caught up with him, scented with damp leaves and beer.

It was Halloween, and he couldn’t have felt more excluded if he’d tried. Crowds of students drifting between party houses in ridiculous outfits reminded him of how different his life could have been had he been born into a wealthy family. Scoffing, he maneuvered around two girls in ‘sexy convict’ costumes featuring a ball and chain alongside a skimpy version of the orange overalls Shane had been wearing only last month. After seeing that, nothing would have surprised him anymore.

He continued down the main road through the grounds, passing cowboys, sexy nurses, Jokers (so many Jokers), sexy kittens, mafiosi, a sexy tequila bottle…

He shook his head, finally catching sight of the massive building ahead. The pale facade was being used as background for a projector casting images of flames and demons, and the lawn in front of it crawled with people.

One got used to squalor in prison, but the sheer volume of the music blasting from every direction and the uninhibited nature of the crowd ahead made Shane stall before he drove up to the curb in the not-so-quiet cul-de-sac.

If everything went according to plan, tonight would be child’s play. He’d found out that his buddies often supplied the local fraternity with fun pills for parties, and it so happened that Rosen Beck, the son of the man who’d put Shane in prison, was a member. Shane had no personal grudge against the boy, but didn’t give a flying fuck about him either, and had no qualms about making him a tool in his father’s downfall. Having one’s son in prison for drug possession and distribution served no one’s political career.

Ignoring two young men who’d dressed as policemen and were trying to ‘arrest’ a group of giggling girls nearby, Shane parked his bike close to a massive stage that would likely feature an unholy spectacle later. He texted the club president that he’d arrived with the treats.

Social skills worked differently in prison, but he was still charming as fuck and would get himself invited into the massive house with Greek letters above the arched entrance. He’d scout out Beck’s son and plant the drugs on him before calling the cops. Easy-peasy. As much as Shane hated the police, they’d be a useful tool tonight.

Shane barked out a laugh when the prez texted him back.

[I’ll send a guy. His name is Rosen. Don’t give the treats to anyone else]

Could executing his plan get any easier?

Shane relaxed, unfolding the kickstand before sliding off his silver Honda and resting his ass on the seat with eyes pinned to the frat house.

A better man would have left the kid out of this ugly business, but Shane had always been bad, and his conscience had no qualms about stepping over some rich boy who’d gotten his life handed to him on a platter and wouldn’t have looked at Shane twice if he didn’t need him to feed drug cravings.

A side door opened, and Shane cocked his head, unsure of what he was seeing. He’d expected a bulky frat boy dressed as a Spartan if he was hot, Joker if he considered himself edgy, or with glowing red horns if he was lazy. Tall, lean, with long dark hair reaching way below his shoulders in wavy cascades, the newcomer was… something else. His naked chest, framed by the folds of a cloak worthy of an elf from Lord of The Rings, shimmered with green and gold. Tight jeans clung to long legs, and he had a lightness to his step despite wearing heavy leather boots with cuffs. And as he approached Shane, the lights of the frat house created a halo around his fluffy locks.

But it was his face that drew Shane’s attention right after he got his fill of staring at the taut stomach glimmering in the lamplight. An elaborate mask covered everything above the guy’s nose, teasing Shane with eyes glinting from small openings. It had a short set of horns, cute floppy ears reminiscent of a doe’s, and covering most of it was a mix of what seemed like moss, tree bark, and feathers, all in dark green, brown, and specks of gold.

Shane was no expert in these things, but that mask wasn’t a gift shop throwaway.

The man extended a graceful hand from under the cloak, and the golden claws at the tips of ring-adorned fingers gave Shane pause. But this was no fairy tale creature. Just a man.

“Are you the guy? I’m Rosen,” he said, pulling Shane out of his stupor.