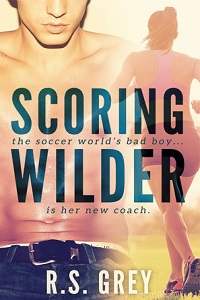 What started out as a joke— seduce Coach Wilder—soon became a goal she had to score.

With Olympic tryouts on the horizon, the last thing nineteen-year-old Kinsley Bryant needs to add to her plate is Liam Wilder. He's a professional soccer player, America's favorite bad-boy, and has all the qualities of a skilled panty-dropper.

Not to mention Liam is strictly off limits . Forbidden. Her coaches have made that perfectly clear. (i.e. “Score with Coach Wilder anywhere other than the field and you’ll be cut from the team faster than you can count his tattoos.”) But that just makes him all the more enticing…Besides, Kinsley's already counted the visible ones, and she is not one to leave a project unfinished.

Kinsley tries to play the game her way as they navigate through forbidden territory, but Liam is determined to teach her a whole new definition for the term “team bonding.”

Cheat on me once, shame on him. Cheat on me twice... what the actual fuck is going on? How in the world have I managed to find my last two boyfriends cheating on me? No, not together. Although, that would have been much more poetic, and at least they could have included me or something.

The reality was much worse.

"Wow. What a treat to walk in on," I noted harshly as I stood in the doorway of Josh's bedroom. Josh and the nameless bimbo screamed and jumped apart on his bed, causing his navy sheets to tumble to the ground. His brown eyes found mine, and for one brief second, I mourned the loss of his warm gaze, but then my field of vision widened and I was slapped with the sad scene before me.

"Oh, no. Please, don't stop on my account. I'm only his girlfriend," I hissed at the bimbo, trying to calm my temper. I was known to be feisty on a good day, so that was hardly brushing the surface for me.

Josh's dark brown hair was ruffled from the bimbo's hands. His sharp features were pitiful, but still handsome. I barely glanced in the girl's direction. Platinum blonde hair was the only feature I noticed. Probably because it was bright enough to burn through my corneas. First, she steals my boyfriend, and then she renders me visionless. Just great.

Is my judgment of character so misaligned that I can't spot the good guys from the bad? No. It's just the fact that I happen to go for guys that can't keep tramps out of their pants. You know the type: young and insanely good-looking.

"… What it looks like,” I finished for him. “Wow, Josh. You know Trey said the same thing, but he didn't have that look of anguish you've got going on right now. Seriously, good work." I applauded him with a hard stare. My claps rang out around the room, and I realized then that it was time for me to leave.

It was a different guy, a different girl, but there was that same twisting sensation in my gut like I was about to keel over on the spot. I spun around and flipped them both the bird before heading back toward the living room to grab my purse.

I heard shuffling and awkward grunts behind me, but I didn't turn around.

"Josh, where are you going? Let her go, we aren't done!" Oh good, she hadn't had her orgasm yet. Maybe my timing wasn't all that bad.

"Kinsley! Wait!" Josh yelled behind me. Did he think we were in the middle of a telenovela?

"Josh, it's over. Don't bother," I said as I threw my purse over my shoulder.

His hand reached out to clasp mine, and I had to actively fight the urge to punch his dick off. Seriously, is it that hard to stay faithful? Are men physically incapable?

"Kinsley! I love you. I love you!" He spun me around, holding the bed sheet up with his right hand and clasping my arm with the other. His eyes were wild, and for a brief moment, I believed him.

Oh god. He did it. He went there. And you know what the sad thing is? I don't even think he was giving me a line. I think the poor schmuck actually thought that he loved me.

"Well, if that's how you show your love I can't imagine the elaborate things you do for your parents."

"Please— hear me out. This meant nothing."

I wasn't listening. I was already building a wall between us. "Thank you, Josh. Thank you for ruining my capacity to trust so that any guy that comes after you will automatically have the cards stacked against him."

Josh had stolen another chunk of my heart, my naiveté, my innocence, and smashed it under his perfectly toned body. When I met him I was on my way to feeling jaded to the whole dating process. I'd already been cheated on once by my boyfriend of six months, Trey, who also happened to be the guy that had taken my virginity. (I know, I know. They should make a hallmark card for that experience since it’s so cliché: “Whoops, sorry your high school boyfriend can’t keep it in his pants… here’s a cute puppy wearing a bowtie.”)

But now? Now I was about ten miles past jaded. It was time to trade in my designer dresses for patterned muumuus and house slippers. Maybe I could join a support group for divorcées over fifty. You know, those women that decide they don't need men to be happy. They'll just knit, take group trips to the Caribbean, and say things like "I always wanted to go out to eat, but Jeff insisted I cook for him. I'm going out to eat every night now, damnit!"