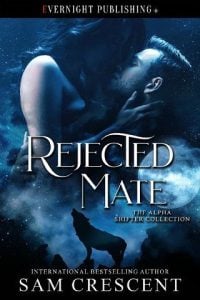 Constance walked down the main path heading toward the town hall of Silver County. A small town located near the mountains with a questionable population, especially as most of them were wolves. Human by day, wolf by moonlight. This was once her home, a place she loved to be. The people were her family, but since the rejections, she felt the cold seeping into her bones, ready to cast her out.

At twenty-one years old, she was the oldest person to go through her transition as most made the change between the ages of sixteen and eighteen. Not her. Nope. She had to turn on her twenty-first birthday. As if her life wasn’t already hard enough. She loved the pack, she did, but they had a hard time accepting her.

She was the only woman in the pack who possessed curves. Of course, they called her the fat one, chubby, whatever name suited their cruel mood, but she had embraced her figure. Mainly because all the diets she went on were fucking useless. None of them worked. She didn’t lose weight, but gained it.

It wasn’t fair, but rather than dwell on what wouldn’t be, she embraced who she was now, and well, she truly believed she was awesome, or at least she had no choice but to keep telling herself that.

So, the cold. On the moon of her twenty-first birthday, she had turned. Her first-ever full transition into a wolf. Great times. Nothing like a body snapping to really embrace your furry side. She’d also found her mate. The one who was destined to be hers for all eternity.

And this was where the cold came in.

She was a fat, late-changing wolf with a mate who rejected her. That summed up her life in a few short words. Tanner Silver, the alpha’s son, had sniffed her, and he’d been aroused—she’d scented that—but he’d turned her down in front of the entire pack. Rejected her like some diseased thing.

The memory awakened the humiliation.

Within twenty-four hours, her job at the library was revoked, her parents had kicked her out, no one in the pack wanted anything to do with her. She’d gone from being tolerated to rejected not by one, but by all.

She’d packed her bag and been headed to the bus stop when Gage Silver, the alpha himself, had approached her. He told her that she couldn’t go, not yet. She had to come to this town meeting. This had all occurred three days ago.

There had been one hotel that had put her up. The room was small, and she’d spent all three days curled up on the bed, arms wrapped around her stomach, shivering and sobbing as the rejection began to hit her.

In all the pack history, no one had ever refused their mate. The very idea of it was … it wasn’t right.

The thick sweater she wore did nothing to make her feel warm, and considering it was a nice and toasty summer’s evening, that was saying something.

The pack must have been wanting to get rid of her for some time for the effects to be so instant.

A couple of people up ahead stopped and pointed at her. She heard the chuckles and tried her hardest to ignore them. Her face didn’t show the signs of her turmoil, the pain rushing through her body as if she’d been struck by a train repeatedly. No one knew she was close to running.

The alpha had given a direct order, and she had no choice but to abide by it, even though it was the last thing she wanted to do.

She pressed her lips together as she entered the main hall, moving to the back of the corner, wanting to hide. Even her wolf was broken inside. Her wolf being the one that suffered the main rejection.

What sucked the most was that she didn’t like Tanner. They were the same age, had gone to school together, and the truth was, he was a fucking asshole. Gage was a nice alpha. She’d liked him growing up, and if she’d been truthful, had always had a bit of a crush on him. He exuded power but not cruelty. He was fair and controlled the pack with ease. She had never heard anyone complain about his decision-making or his punishments, not once. Her parents had been in awe of him.

Tanner was the complete opposite.

Sure, he was good-looking, and he knew it as well. He chased after girls like they were candy and he wanted to gobble them all up. Being the alpha’s son, he took advantage of his position.

That night when she realized who Tanner was, what her wolf wanted, she had been on the verge of rejecting him. Of saying hell no to him, but he’d gotten there first. Had he known her intention? Did he realize she fucking hated him? Even as her wolf wanted to be with him, she had far more control, and the very thought of being near him made her want to vomit.