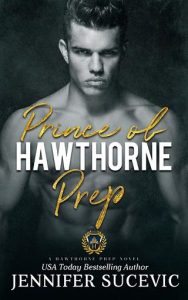 Betrayal. Blackmail. Revenge.
How is it that those three words now rule my life?

From USA Today bestselling author Jennifer Sucevic comes a dark, sexy high school bully romance.
Welcome to the world of Hawthorne Prep. A seemingly idyllic school where ivy clings to the thick stone walls and a wrought iron gate keeps out the townies who can’t afford to foot the hefty price tag.
Except…I’m one of those townies.
I don’t belong here.
Most of the time, I feel like an outsider with her face smashed against a windowpane while staring inside. It’s a lonely feeling. One I’ve gotten used to. There are times when I secretly wonder if I’ll make it through senior year intact.
But then someone comes along and turns my world upside down and inside out. He makes me feel things I never dreamed possible. There’s a possessiveness to the way he watches me, and it sets my nerves on edge.
Especially when it’s in front of my boyfriend.
The one I desperately want to break up with.
The very same one who will make my life hell if I try to pull the plug.
Steering clear of Austin Hawthorne is my only option. A little attempt at self-preservation. For both our sakes.
One night changes everything between us and has me believing in the possibility of something more.
Just as swiftly as I’m given hope, it all comes crashing down around my head, making me a pawn in a game between two boys who will stop at nothing to take each other down.

“Better hurry up,” Mom calls from the kitchen. “Jasper will be here any second, and you don’t want to keep him waiting.”

No, we definitely wouldn’t want to do that.

The thought of seeing my boyfriend makes my belly pinch. Deep down, I know it shouldn’t be like that. But there’s no getting around it, that’s exactly the way he makes me feel. Nervous and on edge.

With those thoughts clouding my brain, I smooth a hand down my navy blazer before running a brush through my long, blonde hair. Just as I pick my backpack up from the floor near the narrow desk shoved against the wall, there’s a blast of a horn from outside. The knowledge that Jasper is waiting in the driveway has me quickening my step.

As I head out of the tiny bedroom, Mom waits in the living room with a stainless steel to-go container filled with my favorite coffee blend. I flash a grateful smile before nipping it from her outstretched hand.

“Thanks. I really needed this.”

“I know. You were up late studying. Again.” She arches her brow in a look meant to convey concern.

With a shrug, I bring the cup to my lips and take a sip. For me, there’s only one way out of this town and that’s with hard work and high grades which will hopefully end up with me being awarded a full academic ride to one of the state schools.

As I bring the steaming brew to my lips, a longer blare of the horn fills the air.

Instead of getting annoyed, Mom shoos me toward the door. “Hurry now and I’ll see you at school.”

I draw in a shaky breath and jerk my head into a nod before crossing the cramped space. With each footfall, I feel like I’m walking to my death.

Am I being a tad melodramatic?

The horn sounds for a third time.

Then again, maybe not.

With a final wave, I wrap my fingers around the handle and yank open the door before stepping onto the front stoop. My eyes reluctantly lift and settle on Jasper, who lounges behind the wheel of his sleek silver Porsche 911.

As soon as our gazes lock, he throws his hands up in an impatient let’s-go gesture.

That’s all it takes for the vague feeling of unease to congeal into a painful knot at the bottom of my belly. With any luck, I’ll only have to listen to him bitch about me taking too long and keeping him waiting. The last thing I want to do is fight him off this early in the morning.

There have been a handful of times when I’ve casually mentioned that it would be easier for me to catch a ride to school with my mother, since she works in the office at Hawthorne Prep, but he always quashes the idea, insisting he drive me instead.

It takes some mental prodding for me to force my feet into movement. I remind myself to paste a smile on my face as I walk around the hood of the sporty little vehicle and slide onto the plush leather seat beside him.