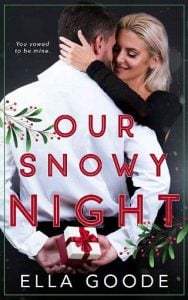 It took one look for Rowan to fall for Charlee. He wifed her immediately—as in two weeks after their first meeting. Shocked by his own lack of self restraint and the dark thoughts of possession and ownership that filled him, Rowan fears his precious wife will leave him if she finds out how he really feels, how crazy in love with her he really is.

It took one look for Charlee to fall for Rowan. She said yes when he asked her to marry him—even though it was only two weeks after they met. It was her fairy tale in the making. Her happily ever after doesn’t last long though. The ink is barely dry on their marriage certificate when her hard pursuing husband suddenly becomes cold and distant, off on business more than he’s at home. Fed up, she hands him divorce papers.

Rowan knows he’s in for a fight but he’s not signing those divorce papers and he’s not letting Charlee get away, even if it means kidnapping her to a small cabin in her home town in the dead of winter. If she’s snowed in, she can’t leave him. He knows he can never let her go and all the control he’s barely held onto snaps. His wife is about to find out how truly obsessed he is with her.

“This is a…” My gaze runs from the smoked stained exposed beams in the ceiling to the dirty oak floors that appear as if they haven’t been cleaned since the cabin was built twenty years ago, and I try to conjure up something complimentary about this ramshackle contraption called a home that realtor in town said was the only place available for the low price of eighty grand. “Place,” I finish.

This is Charlee’s hometown, and I convinced her to take this trip with me to hash out the details of our divorce. It was a stalling tactic. Besides, it’s Christmas Eve and we should be together. She’s still my wife.

I’ve been stalling successfully for the last two years of our four-year marriage. Every time my wife has turned her sad eyes in my direction and asked for us to talk, I’ve conveniently had a business meeting, a deal to close, a property to see.

For two years, over seven hundred days, I’ve spent more time away from my wife than with her for the sole purpose of saving my marriage. I think I’m losing my mind at this point. And now, in a last-ditch effort to convince her that divorce is the worst decision she could make, I bring her to what amounts to little more than a dilapidated shed in the middle of a snowstorm in her hometown. At least she’ll be trapped here for now. We barely made it in the snow already coming down so hard.

Rule number one in a business setting: never show weakness.

I take the bag from her slackened hand and march toward the bedroom. Charlee trudges behind me. Her childhood home is occupied by her brothers and sisters with all their kids. We’d never have a moment alone there.

“Only one bedroom.” Her tone is flat and resigned. It’s the defeat in her voice, as if marriage to me has sucked the life out of her, and that cuts me to the core. She tried to move into the spare room in our main home. I couldn’t have that. I moved my shit to the other room to not have an all-out fight with her. I still slip into the bed at night. As much as I try and give her space, it’s damn hard, especially when we’re under the same roof and I’m not traveling for work.

“We’ll make the best of it.” The odd thing is that once we are in bed, our defenses down, our clothes off, I can make myself believe she’s still in love with me. Or at least in lust. She’s maddeningly responsive to every touch and caress and kiss. She’s eager, too, willing to do anything I want and asking for more. If she only knew all the dark, fucked-up shit I’ve wanted to do. I’m always fighting for control in our bedroom. My Charlee is so sweet and pure. I’m not so sure she’d be so eager if she had any clue to the dark thoughts I have when it comes to her. She’s the only one to ever draw them from me.

Outside of bed, we barely talk. She rarely smiles, rarely initiates a conversation, and when she does bring up a topic of conversation, it’s change. She wants to move, she wants to get a job, she wants more friends. The message is clear: life with me is not satisfying. She’s searching for something else. The same as when I’d met her. Though that stopped when we got married. She was happy and content. Until she wasn’t. We can’t seem to find our way back to that place.

I’ve tried to make myself absent. Leaving her alone seems like what she wants, but even that does not make her happy either. I’m at a loss as to what turned my beautiful, vivacious bride into this sullen, silent housewife. It’s killing me.

“I don’t understand why we had to come all the way to Winter Falls to discuss the divorce.” Her clear voice slices through the air.

I stiffen so she can’t see how hard the blow lands. “You grew up here. I thought you might like the change of scenery. Besides, it didn’t make sense to have it in the house. I still live there and plan to do so in the future.”

“Of course you do.” Derision drips from her words.

“What does that mean?”

“Nothing.” She inspects the bathroom and then the kitchen. Her finger swipes along the side of the small stainless steel sink and comes up blackened. Even during all this, she still wears her wedding ring. Mine will never leave my finger.

She shrugs. “It’s not bad. Dirty, but charming. At least it’s got character.”

I don’t understand her. This shack is nothing but a few sticks and nails, while our home is a stately three-story mansion with a storied history. When she first moved into the home my grandmother passed down to me, I thought she loved it. She exclaimed over the garden in the back with its intricate hedges and beautiful fountains. She loved the third-floor attic with its vaulted ceilings and nooks tucked into the circular turret like structures at the corners of the old mansion. But somewhere along the line, her love for the home, much like her professed love for me, turned to distaste.