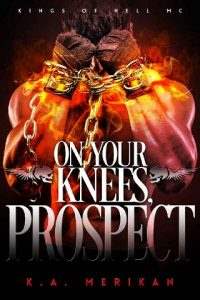 The secret passage to the cellar blew into Jake’s face with air that smelled like the innards of a dragon—stale yet with a hint of smokiness left behind by the roasted meat. For several seconds, he stared into the nothingness below before switching on the flashlight and revealing the staircase hidden behind the wooden panels.

Jake couldn’t wait to find Elliot. Not because he cared much for the guy, but because it would please Knight so very much. Knight would recognize just how useful Jake was, how dedicated, and Jake would quickly be back to serving Knight in other ways than shoe shining or polishing Knight’s bike.

Though familiar with the morbid history of their clubhouse—and the cellar in particular—he’d never felt it was his place to invade the rooms where so many innocent people had perished at the hands of that madman William Fane, one of the original owners of the property. To be perfectly honest, the idea of going down there still creeped him out, but he wasn’t a baby (he was of legal drinking age since March!), and for the sake of Knight and the club, he would prove that Elliot didn’t deserve their trust.

The glow of the flashlight led him downstairs, licking the old stone and brick as it descended to the floor below.

The early morning hours were usually quite peaceful here in the clubhouse once everyone got tired of partying. Away from town, in the woods, nothing could disturb the peace, but there was something creepy about the complete stillness in the cellar. The sounds of Jake’s footsteps and breathing were the only ones around, as if they existed in a vacuum so intense the silence transformed into a quiet ringing in his ears.

If a drop of sweat dripped from his body to the floor, it would have probably made a noise loud enough to create an echo.

And he was sweating quite heavily despite the cool dampness of the air.

In which room had William Fane tortured his victims?

Jake’s hand moved across the ancient-looking wooden entrance to his left, but when he tried to open the door, it wouldn’t budge.

That wasn’t where the weird smells were coming from though, and Jake directed his attention at the crumbled wall farther down the corridor. Reddish dust clung to the moist walls, and the crushed pieces of brick piled on either side of the entrance betrayed its origin. A hammer and chisel rested on the floor, a testament to their user’s conviction that no one would come down to this creepy place and disturb them at work. For a moment it angered Jake that it could have been Elliot who damaged club property, but it didn’t take long for him to realize what a ridiculous idea that was. Elliot could have hardly carried a hammer this big, much less used it.

But that didn’t mean he wasn’t hiding in the labyrinth of rooms down here.

Ignoring the unpleasant twist in his stomach, Jake rushed through the tear in the wall, because he wouldn’t let childish fears keep him away from things that needed to be done. Several doors stared at him with their uninviting rot, each surely hiding a darkness thicker than tar, secrets of the brutal man who’d murdered several dozen young men in those very corridors.

Jake had come here to make the patches proud, to make them see he was worthy of becoming one of them. Still, his voice came out an octave higher than he’d have wished it to.

“I know you’re in here”—he said even though he could as well have been talking to dust and old walls—”Come out. Let’s talk things through. You know, like civilized people.”

In the black void around him, something scraped against stone. It was a brief, silent noise, like that of a shoe gently moving against a damp floor, but in the near-perfect silence it echoed louder than a scream.

Jake’s heart picked up the pace of its march, and he dove into the room to his right, intent on finding the source of the sound. It could have been mice, but Jake wouldn’t take any chances.

Stepping inside, he raised his flashlight to see the entire chamber and recoiled so rapidly he stumbled over the threshold. Three pairs of empty eye sockets stared back at him from naked skulls. Two of them—one perched atop a barrel and one part of an entire skeleton locked inside a dog cage—contrasted with the gentile decor and the way the third corpse calmly reclined in a chair clad in what was remaining of an old-fashioned gown.

With blood rushing to his head, Jake stared at the scene in complete silence, half-expecting one of the dead bodies to raise their hand in greeting. But nothing happened.

It took Jake minutes to unglue his back from the wall and breathe normally again. Goose bumps crawled all over his arms even under his hoodie. When he finally moved across the dust-filled room, the floor whined under him as if it didn’t welcome his presence.