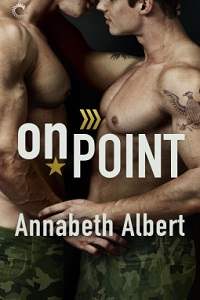 Ben was out again. Which wasn’t a surprise, really, and Maddox refused to dwell on it as he rinsed out the bowl. He had a shiny new professional-grade stand mixer and an oven full of muffins. He didn’t need to be worried about his roommate and friend and what he might or might not be getting up to. Chances were high that Ben wouldn’t show up until morning, looking like something their old barn cat back home would have left in Maddox’s shoe. He’d be ravenous to boot and Maddox would have muffins and maybe things wouldn’t be so weird anymore.

He couldn’t blame Ben for needing to blow off steam. After all, their SEAL team was due to ship out any day, and two of their best friends had just gotten engaged, and those were both the sort of things to have Ben on edge and restless and moody as heck, although he’d never cop to it.

Maddox baked and cleaned out the fridge so they wouldn’t come back from their deployment to a science experiment’s worth of yuck. Ben went bar hopping. They each had their ways of coping—

Snick. The sound of a key in the lock made him lose his grip on the bowl, sending it clattering against the stainless-steel sink. Okay. Not out all night. This would be okay too. His stomach went as acidic as lemon zest, but he was okay. No need for the sound of Ben’s husky laugh or an answering low murmur to make his hands clench around the sponge. No need at all.

He kept his back to the living area. The way the U-shaped kitchen was set up, it opened to the dining area, not the foyer and living room, so he wasn’t surprised to hear Ben whispering, “Shh. My roommate’s probably asleep, but we can chill in here.”

“Is he a SEAL like you?” The other guy had the loose drawl and vowel shifts Maddox associated with native southern Californians like Ben, but sounded younger. No surprise there.

“Yup. Let me grab us a couple of beers.” Ben would undoubtedly argue that he didn’t have an accent, but Maddox had studied enough languages to have an ear for little details. Or maybe you’re just hyper-observant of how Ben says cool and caught. You need a new hobby. And a place to hide.

Because of freaking course Ben would pick up someone tonight who needed more seduction than “this is the way to the bedroom.” And it wasn’t like Ben was being rude—in the two years he’d been living here, he’d brought back guys plenty, but he’d asked the first few times if it was okay or if they needed some sort of rules. And back then, Maddox hadn’t needed a rule. Hadn’t wanted rules. They’d been friends well over a decade now, ever since BUD/S training. He’d known exactly what he was getting in Ben, or so he’d thought.

But this was the first time since...

No. Not thinking about that.

And now he was stuck—the muffins still had ten minutes and he’d have to cross through the living room to get to his bedroom anyway.

“Oh, you’re up.” Ben strolled into the kitchen, and Maddox turned around slowly, pasting a smile on his face. Things don’t have to be weird—not if you don’t let them be. “Kitchen smells amazing. Blueberries?”

“Yeah.” Maddox nodded. There really were few scents as wonderful as lemon-blueberry muffins, but Ben’s woodsy out-on-the-town cologne was competing for a close second. The kitchen was too damn tiny for both of them anymore. “Making muffins and stuff to take to Apollo’s for breakfast tomorrow. My goal is an empty fridge by tomorrow night.”

“You think we’ll go wheels up Monday morning? That’s what my gut says, at least.” Figuring out when they might get the call to deploy was one of Ben’s favorite hobbies.

“Probably.” Maddox didn’t need to speculate—he kept his head down and stayed ready regardless.

Ben grabbed two beers out of the fridge—they still had a six-pack of Stone IPA from their last trip up to Oceanside to see Ben’s family. That had been a nice day—good ale in the brewery’s garden, listening to Ben and his father talk the Galaxy’s chances in this year’s MLS season. Ben set the beers on the white counter that Maddox had just scrubbed, then fished out a third and offered it to him.

“Not now, thanks.” Maddox held up his soapy hands.

“Sure.” Ben didn’t put the beer back in the fridge, though, setting it next to the other two. “You want to come hang out? You’d like this guy. Very chatty.”

“You can hear the timer in the living room,” Ben pressed. “Pretty sure this guy would be up for getting to know you too. He seems the type up for whatever.”

Whatever was exactly what Maddox was not up for, and even Ben’s wink wasn’t enough to undo his resolve. He shook his head and set the now-spotless mixer bowl back on the stand. Ben let out a sigh and leaned against the counter. The kitchen really was too small for two guys over six feet, and it was definitely too small for Ben’s coaxing grin.